Masahiro Matsuda-san takes me backstage at Nose Joruri Theater, one of the largest joruri companies in Japan. The theater sits just north of Osaka City, a few miles from Mt. Nose and the remarkable Myokensan Temple. Matsuda-san, who was recently appointed director of the theater company, is faced with the challenging task of raising attendance during a time when visitor numbers are steadily shrinking. He has tried to modernize the production's promotional ads by featuring puppets in spacesuits or black and white cinematic poses more reminiscent of Casablanca than Chikamatsu with little results. Backstage, he holds up the wooden kashira of a female puppet. With the pull of a string, she transforms into a demon with horns sprouting from her head, her mouth in a dangerously fanged grin. 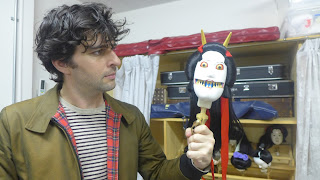 A few months earlier, Matsuda-san had the puppet-makers change the color of her mouth from black to a vibrant  blue. This seemingly insignificant choice, the interior color of a puppet's mouth, went too far. Patrons were upset and Matsuda-san found more trouble than he expected. Things were changing too fast.

Traditional Japanese performance, from Noh to Bunraku, is often marked by this strict adherence to historical custom. Ritual is pivotal and anything divergent can be interpreted as disrespectful to the ancestors who practiced before. The national arts are not just entertainment, but an expression of what it means to be Japanese. So when I attended a production of Doll's Town, an original show by Japan's oldest puppet company, Youkiza, I was left totally bewildered. The production traveled between decades, activated magic lanterns for illuminated explosive air raids, featured humans and puppets interacting in Andy Kaufman Howdy Doody intimacy, and set fire to one of the leading characters.

Started by Magosaburou Youki in 1635, today the company is led by Magosaburou XII, who generously invites me to his studio to explore. Surrounded by marionettes, magic lanterns, and hot coffee in Youkiza's beautiful West Tokyo studio, I have just one question for Magosaburou-san. How does Tokyo's oldest puppet troupe become one of the city's most ambitious and daring theater companies?

At its conception, Youkiza originally performed Buddhist parables with marionettes, each puppet manipulated by seventeen strings attached to a flat control paddle known as a teita. At its center, the teita had a small see-saw-like bar that operated the puppet's head and feet. The puppet's neck was attached to the body through a knob known as a choi. With the assistance of a skilled puppeteer, the choi string brought the puppet to life, creating realistic breath and head movement that, along with the teita, have become synonymous with the company.


During the heyday of itinerant puppet performances in Edo Japan, about five perecent of companies performed with marionettes. However, Youkiza stood out for other reasons. It was one of the first ningyo companies to adopt the collaborative support of a narrator and shamisen player, and they frequently commissioned original plays from contemporaries, including the Edo Era cult figure Hiraga Gennai, who wrote the satirical essay On Farting. Sure, Youkiza did the quintessential Chikamatsu tragedies, but the puppet theater also produced many unknown works before plays gained wide popularity through kabuki and ningyo joruri houses. A fan of these stringed spectacles, the Tokugawa government supported Youkiza throughout the Edo period. Nonetheless, the company faced serious economic challenges that worsened as the Meiji era dawned and shogun rule collapsed. By 1866, Youkiza almost disappeared.

It was the ninth Magosaburou Youki who brought new life to the troupe by reinvigorating the risk-taking penchant that was at the heart of Youkiza. He radically eliminated the tayu and shamisen, brushed up on his storytelling chops, and manipulated the 17-string marionettes while delivering the puppets' dialogue himself. When speaking about Magosaburou Youki IX, Magosaburou-san grins widely across the table, weaving tales about the puppeteer's rebellious escapades, including the introduction of the Magic Lantern, or Utushi-e, into the company's repertoire. The IX performed these illuminated spectacles across the city, including Tokyo riverbanks, where fishing boats were repurposed as puppet stages, and crowds gathered outdoors to witness the astonishing mystical lanterns illuminating keyholes into colorful new worlds.


During Youkiza's 2017 production of Doll's Town, three puppeteers emerged operating magic lanterns projecting slides of fighter jets. Through the lantern's internal mechanisms, the glowing illustrations were transformed into crimson explosions. It's a two-hundred year old technique created by light, lenses, and just a few glass slides - but the moment is surprisingly effective, perhaps even more effective than actual footage.

It's an odd paradox that this artifice feels more sincere than reality. As I bring up this conundrum to Magosaburou-san, he pushes his coffee to the side and waxes poetic. For Magosaburou-san, the tools of the puppet theater, from marionettes to magic lanterns, activate an audience's dormant curiosity. These limitations of the physical object are metaphysical invitations for a viewer to engage his or her imagination and enter head first into the world of the play.

At the end of the 19th century, these techniques were just as effective, as Magosaburou Youki IX's innovative introduction of magic lanterns and new performance methods contributed to the rise of Youkiza's popularity. The company worked feverishly in Japan's yose, a type of Japanese Vaudeville. They performed alongside musical acts, magicians, and comedic storytellers known as rakugo. However, despite this success, the company continued to face obstacles, from internal family conflict between Magosaburou IX and his son, Youki Isse (Magosaburou X), the rise of the film industry, and the devastation of World War II, which left much of Youkiza's Edo era puppets and magic lantern equipment destroyed.
However, for Youki Isse, the 21st century's economic and existential challenges inspired him to question the role of Youkiza in a rapidly changing Japan. Like his father fifty years earlier, Isse wasn't satisfied with the company's work. He wanted to diverge from the world of yose and experiment with large-scale productions, dramatic works, and broadcast television. While Isse's defiance led to serious paternal conflict that lasted decades, he led Youkiza into a fruitful collaboration with NHK, Japan's public broadcasting network. Under industrial lighting, where puppet faces cracked and set piece were set aflame, Youkiza produced one of the first broadcasted puppet shows in Japan. The live televised performances garnered national attention and newfound support for the company, leading to an era of large-scale theatrical productions and new contemporary work. Establishing Youkiza's place in modern Japan, all with the same puppet fabrication and manipulation techniques from the last three and half centuries, Isse was eventually granted the Magosaburou title by his father.

Two generations later, Magosaburou XII shares so much in common with his ancestors it feels like they are at the table with us. Like his forefathers, Magosaburou-san didn't have any toys. As children, the Youki line was only allowed to play with marionettes. By four, they all made their stage premieres, performing marionettes alongside fathers and grandfathers. But most similarly, he has pushed the company in new directions, producing Japanese kabuki classics, the radical works of Artaud and Jean Genet, international collaborations, and original shows that explore post-war and post-bubble Japan.  As an artist who developed in the 1970s, Magosaburou-san found inspiration in Tokyo's radical underground  theater movement, ultimately incorporating the spirit of Shüji Terayama and Juro Kara into his Edo era company. This has shaped a contemporary Youkiza that offers a rare reflection into both modern and traditional Japan.

Today, the company is designated a "National Selected Intangible Folk Cultural Property" and a "Tokyo Municipal Intangible Cultural Property," however, Youki-san admits he faces pushback from cultural institutions. As one of the oldest surviving theater companies in Japan, officeholders, cultural ambassadors, and bureaucrats want him to stick to tradition. But what if your tradition survived by taking risks and challenging the status quo?


I ask Magosaburou-san what kind of work he hopes Youkiza will produce in the future. "I can't really know and I don't really care," he responds. "As long as they keep using the same puppet techniques, I'm ok." And how can he care? In order to survive, it's about answering the question that every Magosaburou Youki has asked for the last 375 years. "What Does it mean to be Japanese in this moment... and this moment... and this moment..." It's a question that never gets old.

For more information about Youkiza, visit their website at: