After a short bicycle ride from Sanjō Ōmidō Hachiman shrine, I am standing at the entrance of a graveyard. There's no iron gate, stone markers or memorial plaques, only a winding camphor tree caught between the fall and winter season. With overgrown plants and wild daffodils, the cemetery feels a bit neglected - perhaps due to its inhabits. Six feet below are the remains of puppets, with wooden heads carved from cypress and tiny fingers hinged with whale bone, buried by puppeteers searching for a final resting place for their sacred figures beyond repair. 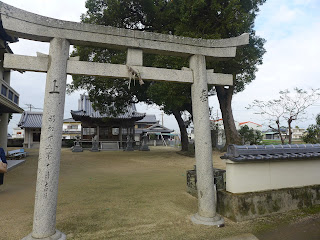 Sanjō Ōmidō Hachiman Shrine in Southern Awaji is the birthplace of the region's puppet traditions, where centuries earlier Shinto priests manipulated puppets to appease the god Ebisu and grant good fortune for the rural island dwellers.

As I mentioned in my previous entry, these puppeteers eventually teamed up with traveling storytellers, morphing their performances from religious ceremony into itinerant entertainment. They were also notoriously grunge, part of a lower class that embraced a bohemian lifestyle. Shunned from society, puppeteers found their home amongst the gamblers, thieves, and prostitutes.

And here, in the Sanjō neighborhood of Awaji, was the center of it. But today the town is frightfully quiet, caught in an economic slump that has taken a toll on village life. 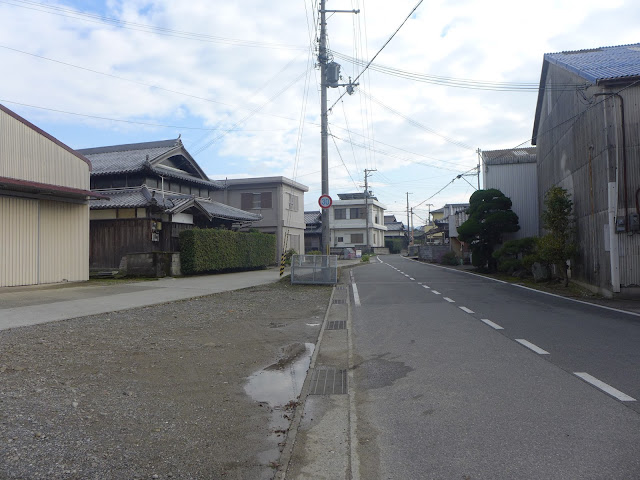 Like the puppets underfoot, the history of Ōmidō Shrine is concealed - but just 15 kilometers down the idle highway, past a McDonalds and kiddy park, there's a different story still unfolding.

Hovering above Awaji's Fukura Bay, the puppet theater looks like a charcoal-colored Millennium Falcon - a planetary visitor surrounded by abandoned storefronts, a fish market, and a Family Mart. 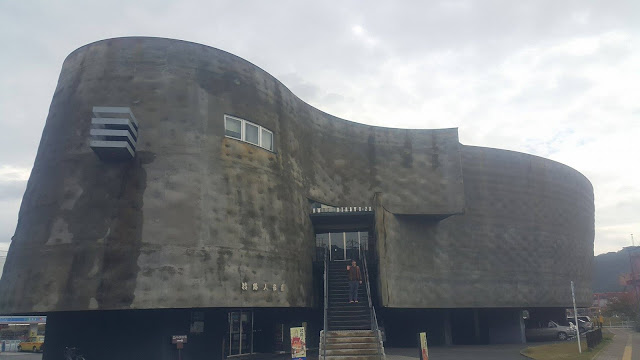 Awaji Ningyo Za (Awaji Puppet Theater) was previously located a short walk from the Sanjō Ōmidō Hachiman shrine. However, in 2012 it was relocated about ten miles south in the tourist-friendly Fukura Bay.

Inside, the performance hall is an air-conditioned memorial to the original theater. The proscenium is embellished in fragments from the Sanjō theater’s roof, while the rubble is preserved in rocky details along the interior walls. In the rear, glass cases showcase 16th century puppets and original hand-painted panels from fusuma karakuri performances. 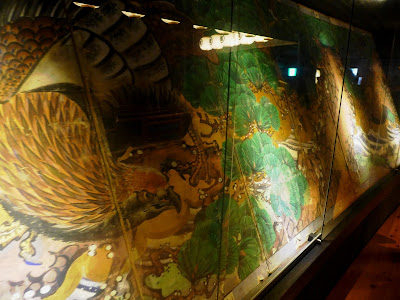 Japanese lanterns line the perimeter and audiences sit in professionally-crafted bamboo benches. The design attempts to summon its rural island roots, but with the enormous embroidered curtain, well-crafted aesthetic, and gift shop in the lobby, it can't help but feel wonderfully artificial - like Disneyland's Enchanted Tiki Room. Instead of a Dole Whip, audience members are encouraged to purchase Awaji cookies branded with the face of everyone's favorite puppet god, Ebisu. 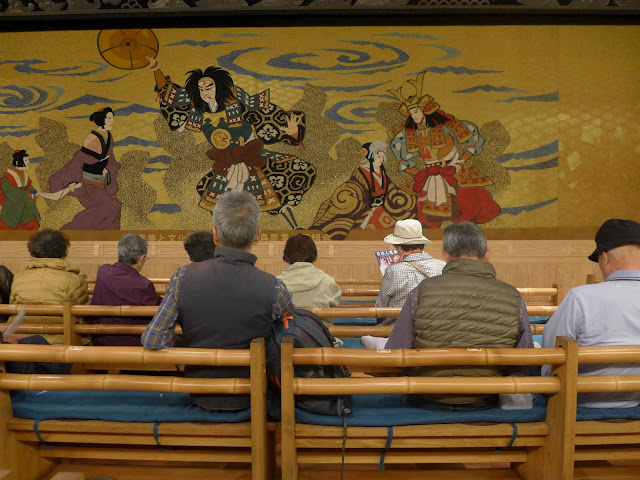 On a typical day, bucket hats fill the audience as many visitors arrive via bus tours geared towards regional retirees. There are typically three to five performances a day, each made up of three acts: a comedic ritual with the god Ebisu, an excerpt from a classical drama, and a performance of Dogugaeshi (fusuma karakuri).

At first, this mash-up of day trip attraction and Edo Era tradition was difficult to reckon with. Was I actually experiencing traditional Awaji puppet theater? Was the theater's modernization and its condensed production style doing more harm than good? However, after spending a month in Fukura, observing rehearsals, talking to locals, and hanging out backstage, I came to realize that Awaji Ningyo Za is a traditional puppet theater with tourist attraction frills. These modern adjustments are masks worn to survive in the 21st century. 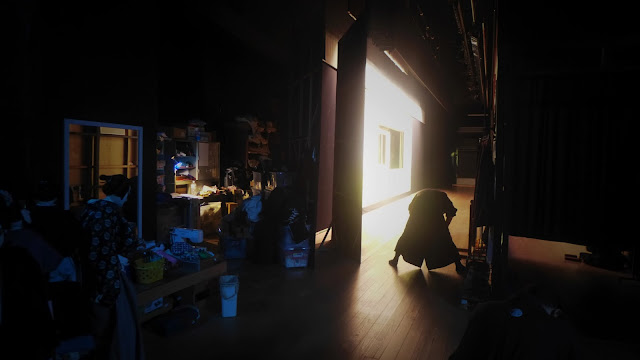 The Awaji troupe operates under a rigid training and rehearsal regime. The lead puppeteers, musicians, and narrators train for over twenty years. In December, the lead shamisen player, Tsuruzawa Tomoj, passed away. She had been performing for over 90 years. She was 103.

One of my favorite performances I’ve seen in Japan is Awaji Ningyo Za’s excerpt from Datemusume koi no higanoko. Confronting her own death to save the life of her lover, a young woman wildly dances across the stage as her long black strands deliriously fly around her face. The performance starts out graceful, but transforms into something more grotesque and chaotic. At the end of the scene, hair unruly, she climbs a bell tour, the puppeteers holding her arms from the inside. After intentional stumbles, she is thrown over the top of the tower, almost haphazardly. The scene is melodramatic and showcases the puppet’s feral qualities. This is one of the main differences between Awaji ningyo and Bunraku - its a bit more untamed. While Bunraku appealed (and appeals) to a more sophisticated crowd, Awaji was a tradition primarily performed for commoners. Even with the hawking of ningyo cookies, Awaji Ningyo Za still manages to preserve this wild quality.

Each show at Awaji Ningyo Za ends with a six minute performance of Dogugaeshi, also known as fusuma karakuri. Dogugaeshi is a form of rural performance where sliding hand-painted panels move in and out of a proscenium, delving deeper and deeper through an illustrative portal. I plan to write much more on Dogugaeshi in April. 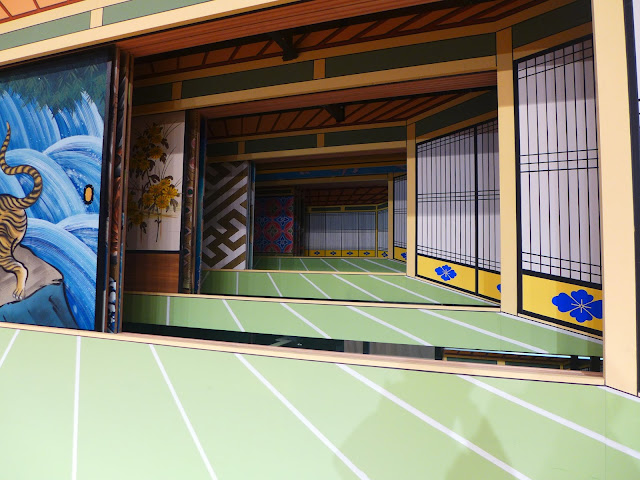 While in Awaji, I spend my nights at rehearsals as the troupe prepares for a performance at Tokyo's National Theater. The show calls for over 30 puppeteers, so members of the community assist and operate secondary characters. Their manipulation is certainly not too cultivated, but this is what makes Awaji Ningyo Za so interesting - it's tightly bound in the Awaji community. It's a city center, a sort of performative town hall, for the people of Fukura. Almost all of the local schools offer shamisen and puppetry classes, and there are a dozen performances every year featuring middle and high school students. Some of the these students even go on to work at the puppet theater after graduation. At the local cafe, the barista is excited to talk about the upcoming puppet shows. At the ice cream shop, the husband and wife owners generously give me an extra scoop since I’m a puppeteer. Awaji puppeteers are everywhere, saying hello at the post office or grabbing udon with their family at the local noodle restaurant. The longer you spend in Awaji, the more you realize that puppetry plays a vital role in the city's success, both culturally and economically. 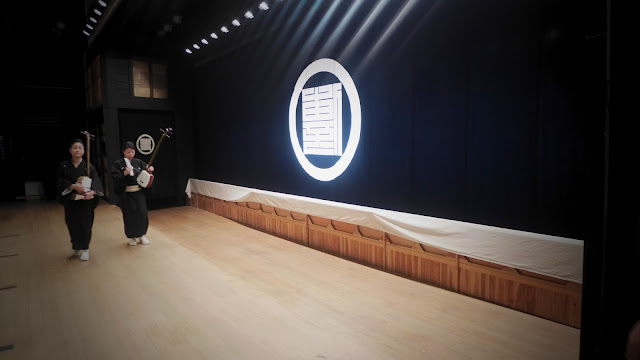 Although much smaller, Fukura reminds me of Takarazuka, home of the Takarazuka Revue, an entire city centered around one theater. In both Fukura and Takarazuka the puppeteers and performers are like adored athletes. Like a sports team, they offer the city a sense of purpose. While walking around Fukura it's obvious that Awaji Ningyo Za has fostered a sense of community, and might be why you can't help but be met with friendly and inquisitive neighbors throughout the town.

Returning to the Sanjō neighborhood, there sits a museum dedicated to Awaji puppetry. Inside, you'll find 16th century puppet costumes, mechanized wooden heads, and miniature models of the Edo Era’s outdoor puppet theaters. But it’s every Saturday afternoon when the spirit of Awaji puppetry is on full-display. During my time on the island, I looked forward to these weekend visits, when a group of dedicated puppet hobbyists meet to carve heads, hinge hands, and thread wigs. 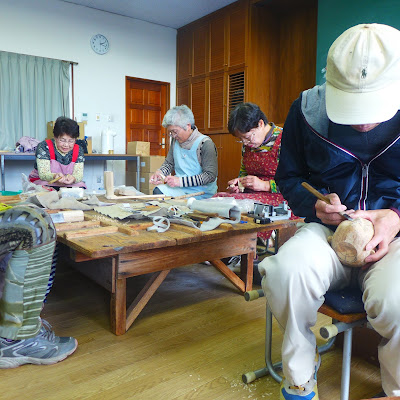 The group has been meeting for over 30 years. They are creating puppets with the same materials and zest of those puppet-makers from centuries before. 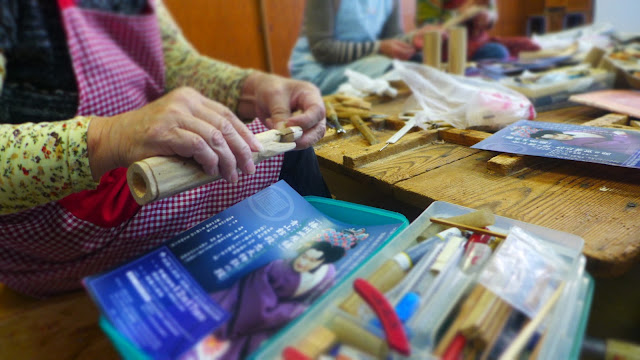 Together, in their 70s and 80s, they still trade notes and make hand-crafted guidebooks filled with photocopied pages and handwritten instructions. 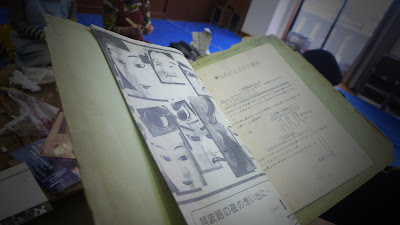 They are generous with these references, sharing them without hesitation. It’s one of the most inspiring experiences I’ve had in Japan, watching how puppetry connects this group of artisans to their ancestors, to the region, and to a history spanning half a century. 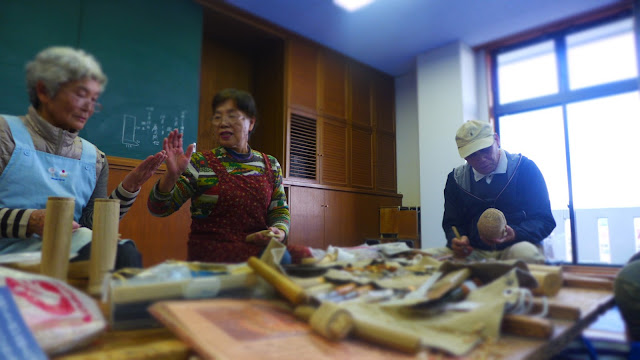 After my days at Awaji Ningyo Za, I often stop by a small coffee shop down the street from the theatre. Here, I take notes and chat with the barista about puppetry, his family, and the best food in Awaji. The barista recounts a time, twenty-five years earlier, when the then-governor of Arkansas, Bill Clinton, came to Fukura Bay and stayed at the luxurious Royal Hotel, a short drive away. “He enjoyed Awaji beef," the barista recalls.

But this also speaks to another time, when Japan was experiencing an economic boom, and Awaji’s tourism was more active, attracting the likes of up and coming charismatic American politicians. But today, the town feels like it’s in limbo. It’s either on the verge of becoming a charming tourist destination or falling deeper into the unknown. This is the theme I keep coming across traveling in rural Japan. It feels like the uncertainty of Japan’ post-bubble economy is akin to the unresolved future of rural Japan and its traditional art forms.


But it’s Awaji Ningyo Za’s mixture of community engagement and tourist appeal that gives Fukura a fighting chance. After a month in Awaji, the Star Trekian building stops looking so out of place, and stands like a celestial beacon for the future. During my last visit at the local cafe, the barista sincerely asks me if I’ve considered buying property in Fukura. “We need more puppeteers around here”. 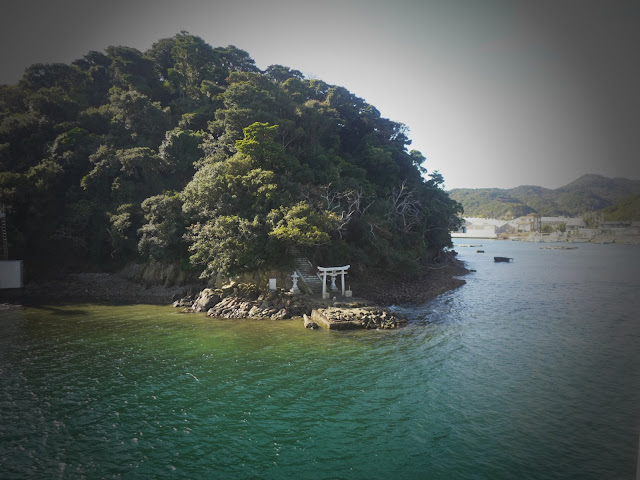 Posted by ekrunk at 9:09 AM No comments: