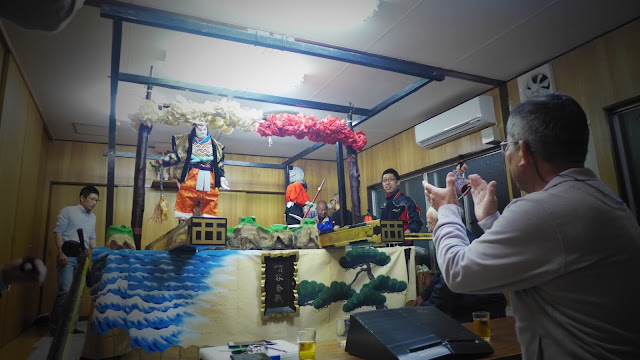 Hundreds of strings stretch across the puppet stage, criss-crossing over wooden beams, in and out of eye hooks, and through the anticipatory fingers of the puppeteers. There are fifteen members of Chiryu Karakuri Ningyo Company, ten of which are crammed inside the stage surrounded by puppets, sashigane, and scripts marked with hand-inked illustrations. During their bi-annual performances, the troupe usually performs on the top of an 18 foot festival float; however, for this week’s rehearsals they use the portable stage, a 100 square foot wooden frame that fills the entirety of Chiryu City's cozy community center. 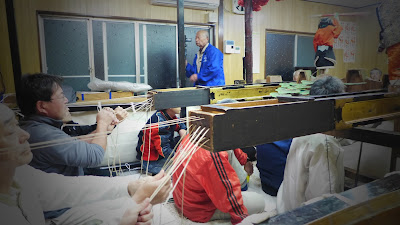 As I move from one side of the room to the other, I push my back against the wall and delicately slide, careful not to disturb the concentration of the performers.  The team of puppeteers are like a crew of rowers, pulling strings, skillfully twisting sashigane, and quick-changing puppet costumes in harmonious collaboration. 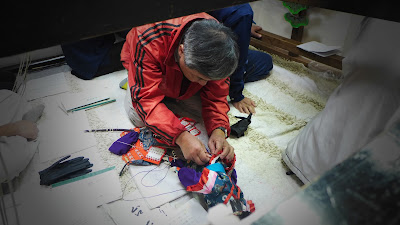 Two long wooden beams, the toi, organize the numerous strings, passing each thread through carefully marked holes. These are the same toi used on the top of the dashi and, along with the puppets, are invaluable components. After every rehearsal the puppeteers wax the internal strings with resin and then carefully pack the tracks for safekeeping. 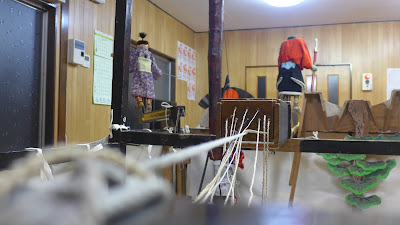 Although it's considered an amateur troupe, Chiryu Karakuri Company is one of the most skilled and elaborate groups I’ve come across during my fellowship. In 1992, they represented Japan at UNIMA’s World Conference in Slovenia and have performed internationally in Italy and Australia. Led by my mentor and teacher Yasuko Senda, this September they will make their French debut at Festival Mondial Des Theatre de Marionnettes in Charleville-Méziéres. Like other karakuri ningyo companies, such as in Takayama's Hoteitai troupe, the group only performs one program, The Battle of Ichi-no-Tani. In the world of Japanese mechanical puppet theatre, the show is an action-packed blockbuster. The 15 minute spectacle is filled with dramatic Edo era ingenuity: puppets skillfully shooting bow and arrows, a samurai showdown, and a gleeful warrior twirling a skewered corpse on the end of a spear. 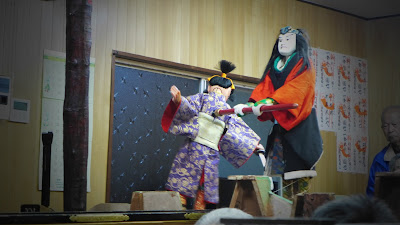 With the unique assistance of a tayu, which I have not seen in any other karakuri ningyo performances, it’s one of the few companies that weaves their audience through a narrative, recreating a legend from the 12th century’s Genji and Heike feud. Like joruri ningyo, karakuri ningyo began as a shinto ritual performed during festivals to offer gratitude to the gods. However, during the Edo era, as ningyo joruri diversified into itinerant performance, comical entertainment, and historical dramatization, karakuri ningyo held fast to its shinto roots. Today, the majority of performances are brimming with the same rhythmic movements, symbolic transformations, and spectacular gestures of the original ritualistic shows. The Battle of Ichi-no-Tani, with a cast of historical characters, live narration, and a fifteen minute runtime, offers something totally different. 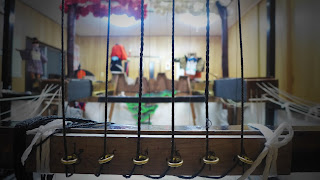 The development of karakuri ningyo into historical drama might be due to another unique feature of Chiryu's company. On the first floor of the dashi, a platform extends specifically for ningyo joruri performances. These shows, which occur before the robotic puppets take the stage, date back to the matsuri’s Edo era origins. 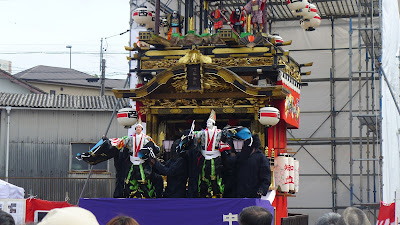 It’s likely that this integration with local joururi ningyo troupes influenced the karakuri company to try its hand at historical storytelling and incorporate the bunraku trifecta: tayu, shamisen, and puppeteer. The dashi reflects this synthesis, with a center tier that is dedicated to the narrator and shamisen player, forming a towering theater with three different stages. 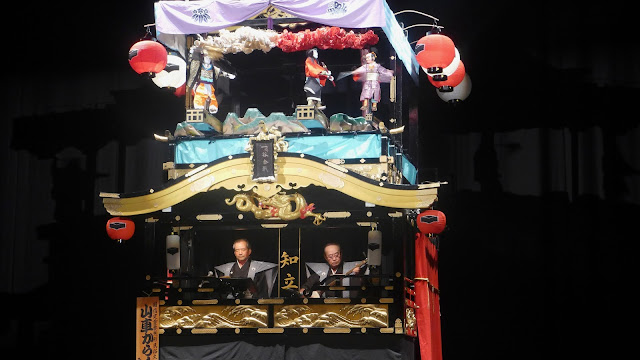 While Chiryu Karakuri Ningyo Company usually only performs every other spring, this year they are busier than ever as I follow them to indoor shows at cultural centers, rehearsals for Charleville-Méziéres, and celebratory events that mark their introduction into UNESCO's Cultural Heritage list. It’s an exciting and fruitful time for a puppet company that almost didn’t survive the 20th century. 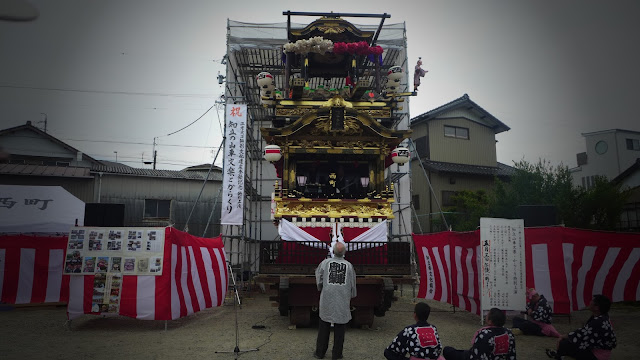 Like most puppet troupes in Japan during World War II, Chiryu’s karakuri ningyo performances completely ceased. It took some companies decades to recuperate after wartime due to the destruction of puppets, lack of national pride, and economic strain. Luckily, Chiryu City found the funds and spirit to rejuvenate the dormant tradition. In 1950 The Chiryu Karakuri Ningyo Company was founded by Mr. Shinji Sakata. Today, the company is directed by his son, Morohiko Sakata, and has almost twenty members. It’s a diverse group of insurance salesmen, farmers, students, an architect, and a few city officials. 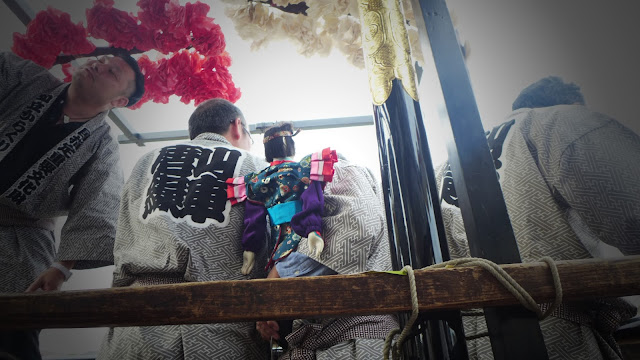 Some of the men have been performing together for almost 30 years, but there are still plenty of new members. In order to survive, there has to be. While the masters of other Japanese traditional arts, such as noh, bunraku, and kabuki, are often in their 70s and 80s, karakuri ningyo takes a lot of unexpected endurance and dexterity. 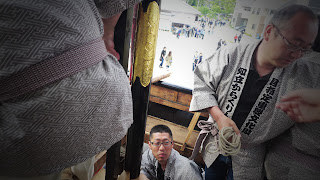 In order to reach the top tier of a dashi, you must pull yourself upwards through tiny compartments, your hands gripping the floor as puppeteers navigate around you. Once at the peak, you balance in-between wooden cross beams as you stretch your neck upward to manipulate the puppets, trying to avoid the glare of the sun. 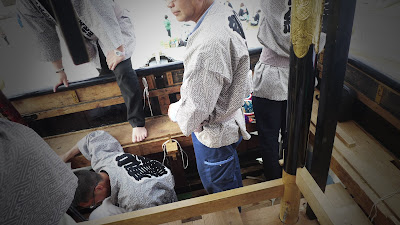 My original expectation was karakuri ningyo would be similar to handling a marionette, requiring a sense of elegance and specificity. While the puppet’s movements can be crisp and expressive, there’s nothing graceful about the manipulation. As I jostle rods and tug at string, it feels like operating heavy machinery. I often struggle to garner enough strength. The puppets, fabricated from Hinoki wood, are heavy and difficult to command. Not to mention they’re filled with interior mechanisms, additional costumes, and hidden characters. 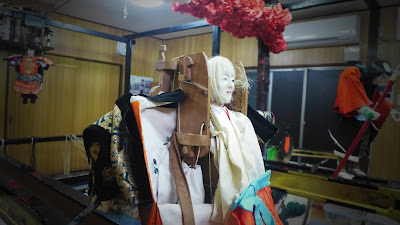 For example, the onerous puppet of Okabe includes a collapsed miniature Shinto shrine and an additional puppet head. He also wields a spear that swings another karakuri ningyo around on its end. To manipulate Okabe, it doesn't just take practice, but serious muscle-power. 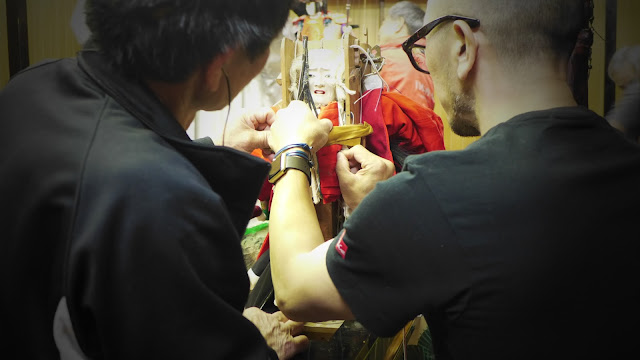 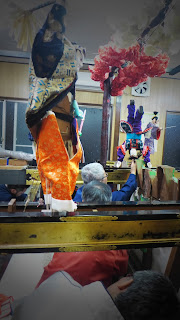 Now, I see karakuri ningyo's manipulation more similar to the powerful puppet machines from Walking with Dinosaurs than marionettes or rod puppets. I’m awed by the troupe’s greatest trick of all - they make it look easy.

After rehearsals, as the group gathers around the small television set with beer and kameda crisps to watch footage of past performances, the youngest members hang by the stage. 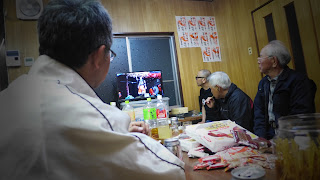 They’re trying to get a grasp on the puppet, Kojiro, a boy warrior who must draw a bow and strike his arrow at the center of a target. There’s no illusion. The puppet must really pull-off the coup. Manipulating only Kojiro’s arms and hands through a series of strings and rods, it’s even more difficult than shooting the real thing. 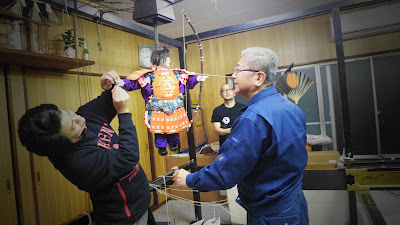 The young men practice over and over, most of the time unable to get Kojiro to successfully string the bow. One of the old-timers approaches, beer in hand, and takes a stab at it. He tugs on the strings. Kojiro draws. Bullseye. 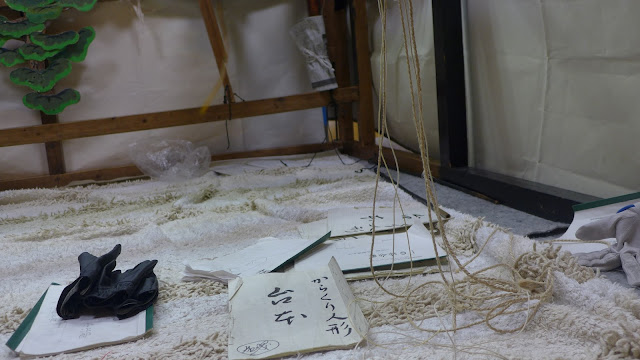