From Takayama's Spring Festival to an Extraterrestrial Ritual: The Shared Awe of the Crowd

Last November, I made my first visit to Hida Takayama to witness the god of luck, Hotei, balance two tiny acrobats on his shoulders and dance above an audience of expectant tourists. Many of us waited for hours, fiddling with digital cameras, snacking on onigiri, and gazing up at the empty stage anticipating the entrance of one of the world's most famous Edo era robots.

Accommodating over a thousand visitors into the shrine took some serious maneuvering, highlighted by the fall out between an enraged elderly man swinging a tripod and the tripod's owner, a photographer who arrived late and jockeyed through the crowd to set-up front row center.

After police officers removed the suspect from the shrine accompanied by the gentle applause from the grandmother to my right, things settled down as we stood shoulder on top of shoulder, heads tilted skyward, waiting patiently in puppet idolization. 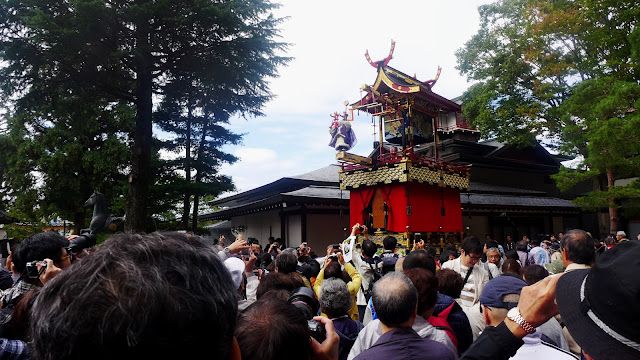 After Hotei's performance, the small city of Takayama, filled with Sake factories, robotic puppets, and one of the best hamburger shops in Japan, had me hooked. 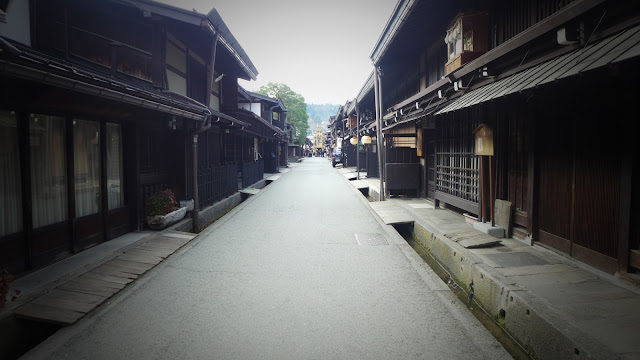 Just a few months later, I hopped on a JR Expressway bus and headed back. As the driver travelled through the winding Hida mountains during a small snow storm I was excited to return without the throngs of festival goers and packed itinerary. During my second trip, I found a quiet town in the grip of winter as I carefully balanced across ice-covered sidewalks to cozy-up in the karakuri ningyo cultural archives belly full of Hida beef.

My third visit to Takayama was three months later in April during Sanno Matsuri. Takayama's fall and spring festivals are both enormous celebrations, each with their own ensemble of elaborate floats, or yatai. They each attract thousands of visitors from across the world, filling the streets with 18 foot floats adorned in glowing lanterns, dancing teenagers manipulating wooden lion heads, and a contagious chaotic euphoria.

This year, for the first time in Takayama's history, an additional festival is scheduled in May to celebrate the designation of the yatai as a UNESCO Intangible Cultural Treasure. The ten yatai from the fall festival, Hachiman Matsuri, will wake from their hibernation, decamp from their garages, and roam the streets of Takayama at the same time as the thirteen yatai of Sanno Matsuri. It's hard to believe, but this event will attract even more people than the annual festivals, which already feel beyond capacity. 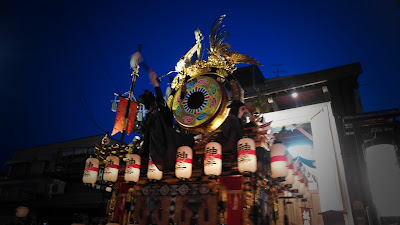 To navigate through Takayama's main street during a matsuri means relinquishing all autonomy and giving-in to the dense tussle of the crowd. As someone who tends to avoid any event with more people than a weekly book-club meeting, I am bewildered by those who willingly attend overcrowded events, from pop-star studded concerts to professional sports games.

The next morning the three yatai with karakuri ningyo travelled over Takayama's famous Nakabashi bridge and met at the city center. 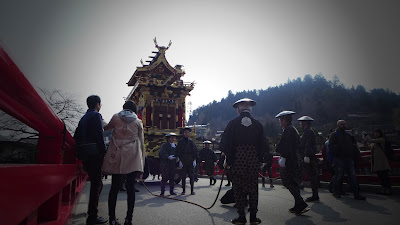 Caked in sunscreen, I spent hours scoping out a spot near a roasted rice ball vendor, Jinya Dango. It was just as crowded as the previous evening, but as the yatai arrived and the puppets emerged, we relaxed into a pleasant anticipation.

As the February snow thaws from Gifu Prefecture, Sanno Matsuri brings forth three puppets that embody the essence of spring's arrival - transformation. With the opening of a mysterious box, a young boy transformed into an old man, an angry dragon burst from a cage, and a fan-dancing woman mutated into a wild lion. With each transformation, the crowd gasped in unison. Similar to my experience in the fall, the karakuri ningyo are some of the best in Japan. 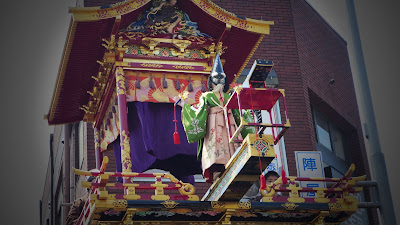 On the second day of Sanno Matsuri, the procession of yatai was cancelled due to rain. However, the karakuri ningyo puppeteers agreed to perform inside the yatai garages. I made my way through the historic streets of the east district to watch one of the performances. 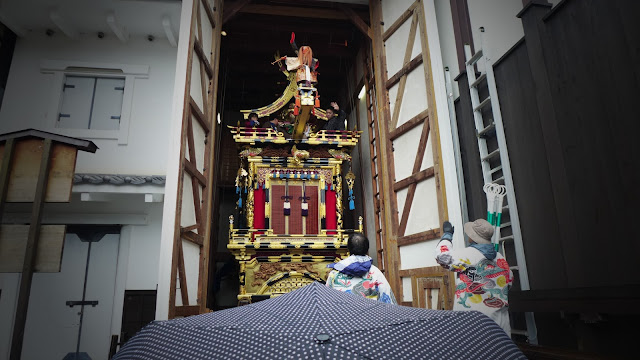 In a narrow alley, surrounded by only a hundred or so spectators, I watched the same performance as the previous afternoon. The show is based on a Japanese tale about a young boy who welcomes a drunk old man into his home, suspects him of being a dragon, locks him inside of a box, and drops him off near the Japanese sea. Filled with vengeful rage, the old man transforms into a dragon and breaks from the boy's makeshift cage. The two puppets are skillfully operated by 32 strings running through the the extended stage, or toi track, by six puppeteers hidden underneath.

Even though I knew what to expect, I couldn't help but join in with the collective gasp as the dragon burst forth and launched confetti into the air. Afterwards, I thought about the previous morning when this same moment of wonder was shared amongst thousands. Despite having spent the last twenty-four hours begrudging my fight through the crowds, I missed sharing this show with the enormous mass of visitors. Even though these performances are for the gods, there's something about reacting to transformations with thousands that makes them feel like a mystical event.

Takayama's karakuri ningyo performs the impossible - it unites crowds of strangers into one shared moment of awe. I left the garage with a newfound empathy for those who enjoy the thrill of attending a World Series.

A few weeks later I'm in the hometown of Mt. Fuji, where the theater director Kuro Tanino premiered a new work, Moon, at the Shizuoka World Theatre Festival. Last year I wrote about Tanino's production Avidya: No Lights Inn, and I spent the winter months of 2017 interning with his company, Niwa Gekidan Penino, as they remounted the production Darkmaster at Komaba Agora Theater in Tokyo. Now in Shizuoka, I found Tanino skipping the conventional stage for an environmental experience that transformed the city's famous open air theater into an extrasolar planet complete with a cast of five little people in spacesuits and a make-shift moon-landing set reminiscent of Tom Sach's Space Program.

Each show welcomed a substantial audience of about four hundred as they made their way through the performing arts park towards a massive collection of astronaut helmets. Adorned in these stellar costumes, the enormous crowd followed the cast through the woods, collected geometric sculptures, and assisted in the creation of a celestial monument at the peak of the massive outdoor theater.

Mame Yamada, who also played the lead in Avidya: No Lights Inn, sat at the monument's apex as hundreds of spectators stared up at his tiny figure with anticipation. Towering above, with his long hair, short stature, and hypnotizing movements, Mame-san felt like a space-age deity or a living version of Takayama's mystical puppets. 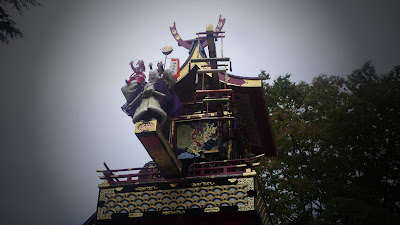 The enormous mass of space helmets, continually intensified the stage images. By interacting with other audience members, transforming the environment, and staring reverently skyward at a three foot astronaut standing on a geometric shrine, Moon felt more more like a extraterrestrial matsuri than experimental theater.

There are many moments of awe-inspiring spectacle in the performance, including a dance scene with music played solely from a collection of amplified Gamboys. With an enormous float designed by German theatre artist Caspar Pichner, the event culminated with the transformation of the outdoor theater into a grand celestial view. As if watching Earth rise from the surface of the moon, the entire audience of space-helmet clad visitors quietly took in the stage.

Takayama matsuri and Tanino's Moon are two rituals developed centuries apart. They don't ask us to identify with their characters, but create an environment where we identify with each other. During both experiences, I recognized my shared impulses with other audience members, and entered into a sort of group consciousness often overlooked in the darkness of a conventional theater seat.

In the performance of Moon I attended in Shizuoka, the experience ended with an awesome but somber image - the Earth is an unsettling foggy tint, no longer inhabitable, void of its natural green and blue wonder. Yet, it's still an uplifting conclusion. The audience emerged from the other side, together, looking down at the Earth's surface in a shared silent stupor. We've learned how to be with each other.