I waited for Rikimaru from the second story of a McDonalds across from the bustling Inokashira Line. I sat by the window, where I could get a perfect view of his typical Saturday evening haunt - a teeming street corner at the center of Tokyo’s most famous theater neighborhood. It’s here, in Shimokitazawa, where Rikimaru made a name for himself, setting up a makeshift library of manga and inviting visitors to experience the thrill of his unusual brand of storytelling. 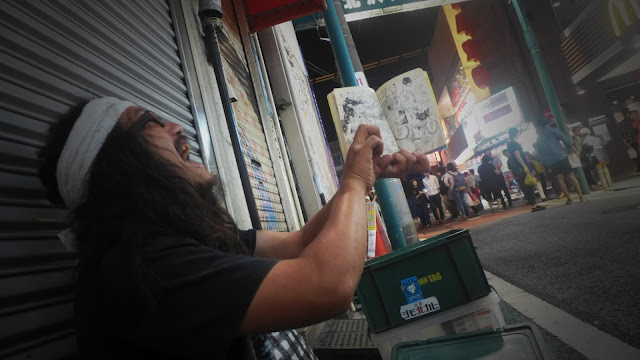 Since Rikimaru Touhou started performing outside the station over a decade ago, he has gained cult notoriety, appearing on television, in movies, and becoming a notable Setagaya personality. However, despite his success, Rikimaru is still susceptible to the rugged life of street performer, faced with heckling passersby, a less than desirable work environment, and dismissive visitors who mistake the complexity of his shows for the ravings of a madman. 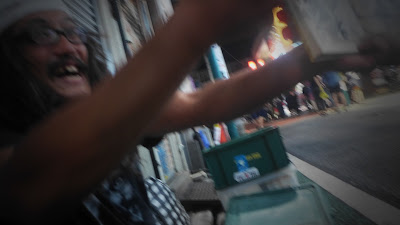 Sure, Rikimaru can get a bit carried away. His voice, alternating between samurai, Japanese school girls, and wicked sound effects, booms through the electric streets of Shimokitazawa, plunging through ramen shops, izakayas, arcades, and the rattling subway platform overhead. It’s impossible not to stop and stare. However, upon spending an evening with the storyteller, I discover someone painfully shy, generous, and polite. Tonight, he continually shifts his makeshift theater, four upside down paint buckets, into the interior of the pedestrian walk so not to disrupt passing vehicles. He greets the local shopkeepers with genuine appreciation, and, as he waits for participants, sits in silent contemplation, his long black hair covering his face like a punk-rock monk.

Two working class men in pinstriped coveralls combine their pocket change and take a seat on Rikimaru’s bucket seats. Tonight, they request a scene from One Piece. Together, they pull their legs into their chests and melt into captivation as they follow Rikimaru’s hands across the pages of their favorite story. 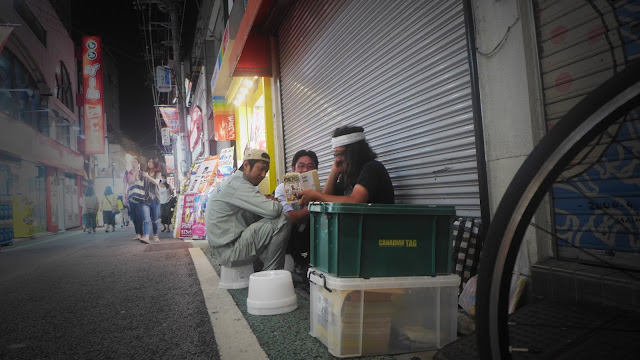 As foreigners watch Rikimaru, they often laugh or squirm in discomfort. This was my initial reaction, equating him with a sort of Times Square Naked Cowboy-esque figure. But this couldn’t be further from the truth, and, only reflects my own lack of appreciation and connection to manga culture. As I watch Japanese salarymen, teenagers, and public utility workers leaning in with delight under the spell of Rikimaru’s storytelling, I learn to appreciate his power. 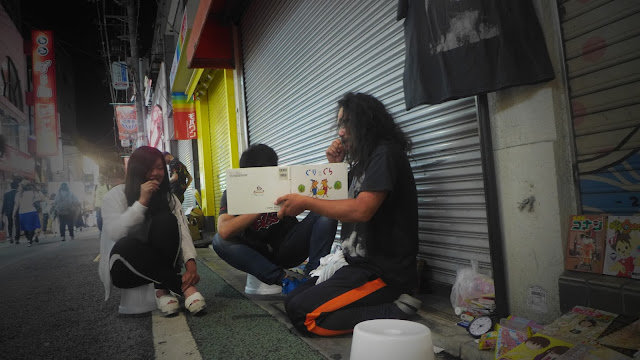 In Japan, manga is consumed in convenience stores, on subways, and during lunch breaks. Manga cafes, or manga kissa, are ubiquitous, dedicating half-a-dozen floors to comic book filled hallways and private reading rooms. Yet, something that is so widely consumed is also surprisingly isolating. It is unusual to encounter the thrill of manga with another person.

Rikimaru offers a rare communal experience, where the characters and stories that fill the imaginations of Tokyoites are suddenly brought to life. In many ways, I see his shows like group therapy - a way of connecting with strangers through shared mythologies in one of the world’s most lonely cities. 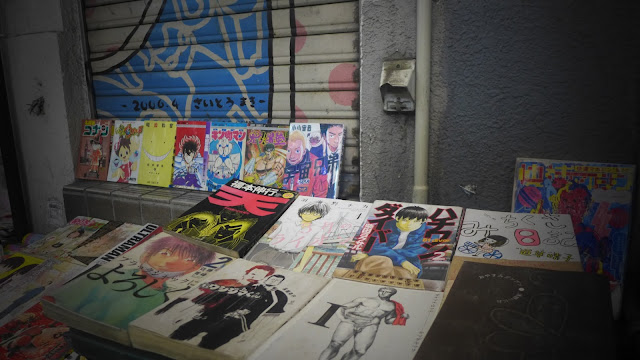 While Rikimaru’s storytelling is often likened to traditional forms of Japanese theater such as kamishibai and rakugo, I think these comparisons don’t give the actor enough credit. They suggest his performances are rooted in pre-bubble Japan, instead of viewing his storytelling as a byproduct of Japan’s complicated post-recession landscape. Rikimaru’s craft is unique to 21st century Tokyo, born in a world of manga obsession, the tedium of the city’s severe workweek grind, and feelings of human disconnection.

Rikimaru has never studied theater. When he started a decade earlier, he had never heard of kamishibai or rakugo. Even though he is stationed in Tokyo’s most famous theater district, he doesn’t cite any cutting-edge directors as inspirations. Instead, it’s all manga, folk music, and hikikomori. Fifteen years earlier, Rikimaru withdrew from society and shut himself into his apartment. He was surrounded only by his guitar and priceless collection of comics. At some point he started to imagine replacing his guitar with his favorite manga. It seemed simple enough. The lyrics were already written.

To me, this leap from extreme social recluse to outdoor performer is astonishing, especially in a city where street theater is rare and widely considered distasteful. Yet, here he is, ten years later, a cult celebrity, still performing on the streets of Shimokitazawa with a few movies under his belt and over 70,000 twitter followers. 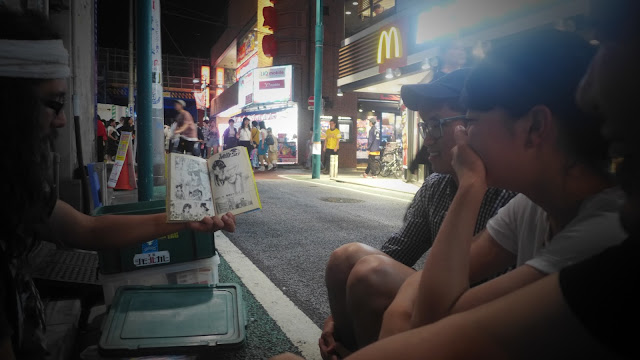 While watching Rikimaru up close, performing story after story, I am inspired by how each manga is perfectly rehearsed, from hand motions, sound effects, and page turns. Despite the seemingly frenzied mood, each movement is deliberate and purposeful. Rarely does Rikimaru do anything that’s off the cuff and it’s this consideration that suggests his performances are only a vehicle to serve the manga.

He’s a master at this balance, often hiding his face behind his long black hair, and carefully manipulating the illustrations across the sightlines of his spectators. Even tonight, as he slaps his cheeks and squeals in ecstasy to compliment a raunchy sex scene, I’m hooked to the pictures. The illustrations flap in front of my eyes as I’m taken through a ride, not with Rikimaru, but into the pages of the book.

In Japan, as I find myself in bookstores or glancing through the personal libraries of my friends, I always wish I had a better understanding into the world of manga. It’s so pervasive that it feels like another language, a pictorial gateway into one’s personality, desires, and selfhood. And I’m totally out of the loop. But watching Rikimaru has provided insight into manga’s power and importance in Japanese life. In front of rapt onlookers, who all know the characters’ dialogue by heart, Rikimaru is like a modern day super hero, briefly unburdening feelings of isolation, and uniting his audience into the communal power of storytelling. 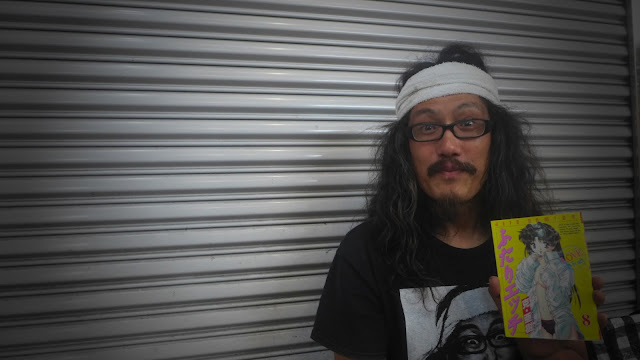