Tahara City sits at the head of Japan's Atsumi Peninsula. A two hour train ride from Nagoya Station, the city welcomes visitors with a landscape speckled with convenience stores, melon farms, and solar panels. On a typical Friday morning, traffic inches across Tahara Bay towards the second-largest Toyota manufacturing plant in Japan, as surfers head to the coast to tackle some of the most thrilling waves in the Pacific.


However, this weekend is different. This weekend, all roads lead to the Tahara Matsuri, one of the last major summer festival in Aichi prefecture.


Japanese festivals are distinguished by dashi, the multi-tiered floats that travel through city streets. Appearing as joyous thrones, these dashi sway above crowds of onlookers, marking the start of the weekend's festivities. Inside, musicians sit tightly packed with their instruments on the first floor, while mechanical puppets move six meters above their heads. These automated puppets, known as karakuri ningyo or "mechanical dolls," are what brings me to Tahara. 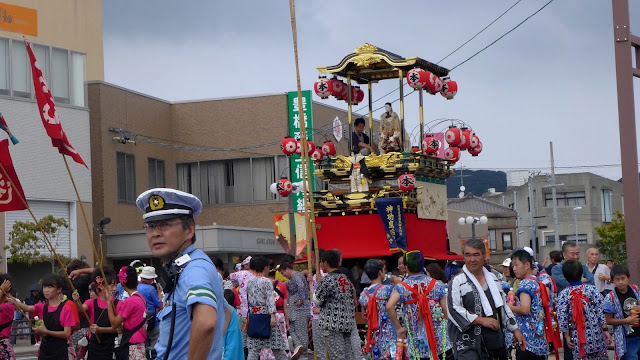 During the first quarter of the Edo Period, wooden robots carried tea across tatami floors to their masters, mechanical frogs hopped across late-night pubs with shots of sake on their backs, and festival floats were adorned with deities that transformed into dragons, orangutans, and magical carps.

As far back as 1662, visitors to Takeda Omi's Karakuri Theater took delight in live entertainment absent of actors, dancers, or any type human flesh at all, for that matter. For over 100 years, the theater produced original plays cast entirely of mechanical actors. 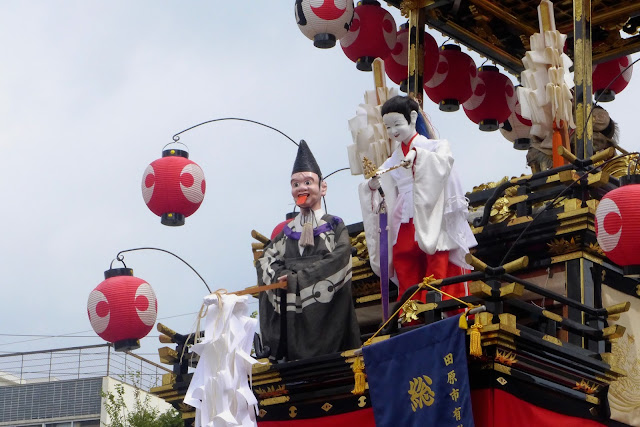 Four hundred years since these mechanical puppets first appeared on matsuri floats, they still delight thousands across Japan, performing in over 60 annual festivals. Even in permanent theaters, karakuri ningyo remains a popular attraction as robot ensembles continue to perform on rotation at the Kiryu City's Karakuri Puppet Theater and the Chiran Waterwheel Theater. The magic of these automated thespians is timeless, and their influence on Japanese culture is unmistakable. Just take a stroll down the bustling streets of Tokyo's Shibuya district, where crowds of tourists line up every night to watch a two hour dinner theater extravaganza with performing robots.

For most of the year, each dashi hibernates in a city-sponsored garage. On the morning of the festival, the floats are released, and pulled by teams of men, teenagers, and children through the city of Tahara. 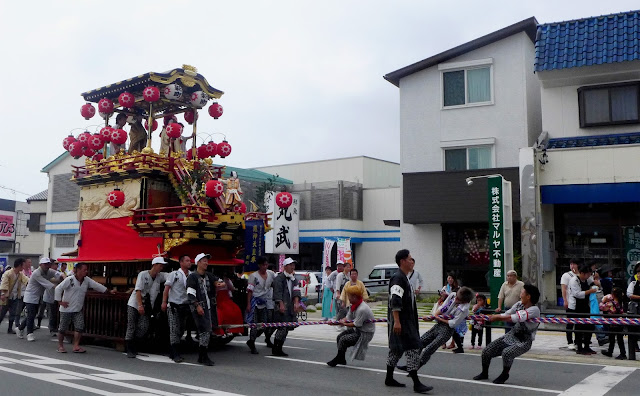 This afternoon, the three dashi converge at the festival center around 13:00, as the musicians, puppeteers, and audience prepare for the show. 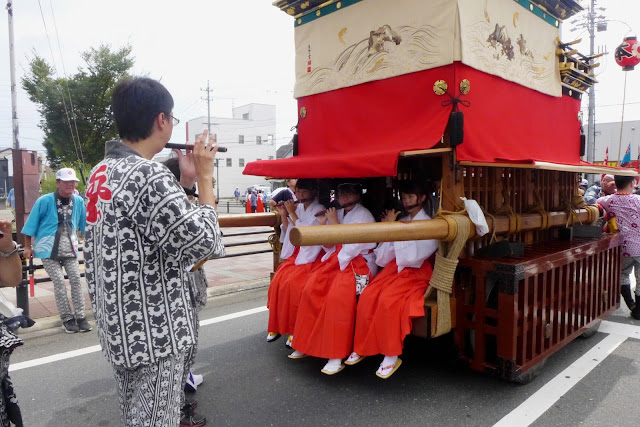 Each performance is five to seven minutes long and captures a particular Japanese legend. The performances end with a cathartic transformation: a fish appears at the end of a pole, an empress is transformed into a dragon, a shinto priest releases white confetti from his wooden gohei. 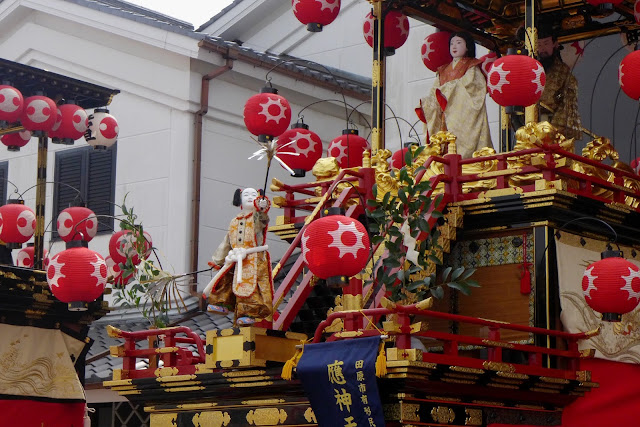 Each float has four puppeteers, with two puppeteers operating each karakuri ningyo within the secret deck. Inside, it feels like a club-house, with a few pillows and the smell of Japanese cypress. Only men are allowed up. 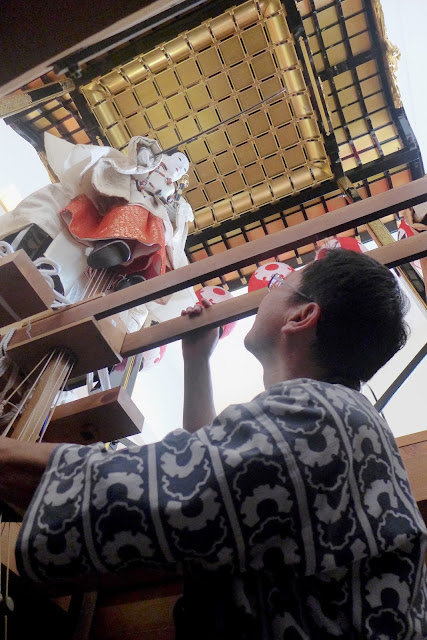 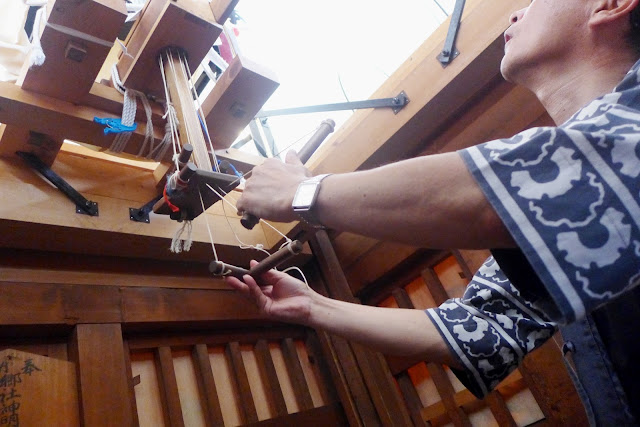 Following the performance, the dashi are exhibited in the festival hall, and greet the visitors from surrounding towns who have traveled to Tahara for the celebration. 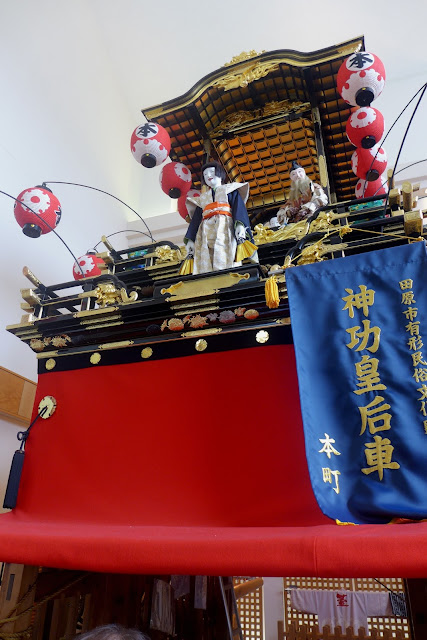 I thought this was the end of the dashi. However, following the karakuri ningyo performance, music echoed down the narrow streets of Tahara. Behind the local elementary school, I saw the colorful tops of more dashi, starting and stopping, traveling in every direction.  Walking through Tahara's neighborhoods, I discovered teenagers adorned in body paint and colorful clothing pulling the floats. 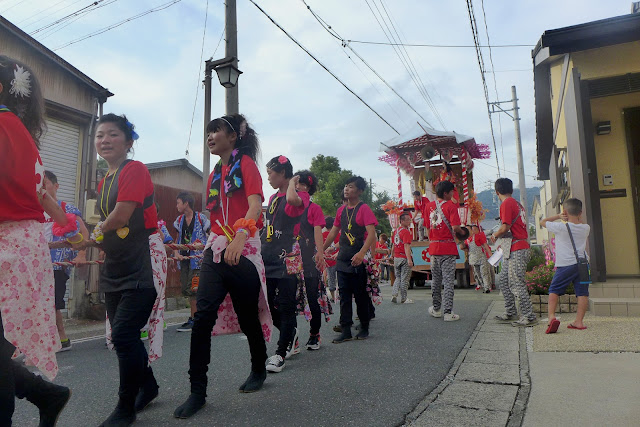 On the bottom tier, young girls filled the dashi. With makeup and kimonos perfectly adorned, each girl climbs from the pit onto the stage. The audience participates, tossing coins and candy in the air.


These performances stem from weeks of preparation, and serve as a rite of passage for the participants. After the performance, the dashi continues to the next house, where it stops, and another girl steps up to perform. 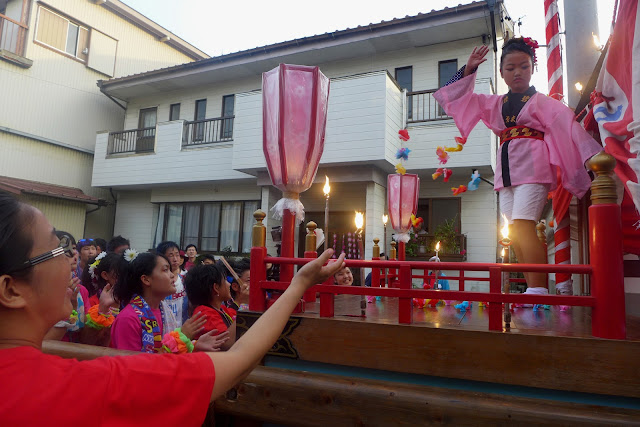 In between the performances, teenage boys jump on the stage, and karaoke to J-Pop, often in zany hand-made costumes. Each stage has its own aesthetic style, some with multiple tiers, where technicians operate music from boomboxes, rotate makeshift disco balls and wave pulsing strobe lights. Many of these dashi have gas-powered flames, a wholly exciting flourish when accompanied by eight teenagers hanging off the sides, dancing and singing along with Japanese pop. 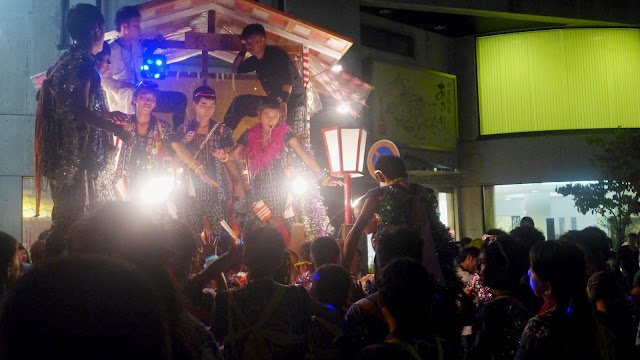 While I came to Tahara to experience the karakuri ningyo, its the dashi that left me with a lasting impression. The festival reframes many Western concepts of a stage, and transforms it into something that is ubiquitous, sacred, and accessible all at once. The design of these floats draws from the style of the traditional karakuri ningyo dashi seen earlier in the day; however, that traditional appearance is invigorated with the makeshift charm of christmas lights, kitsch, found objects, and untamed dancing. 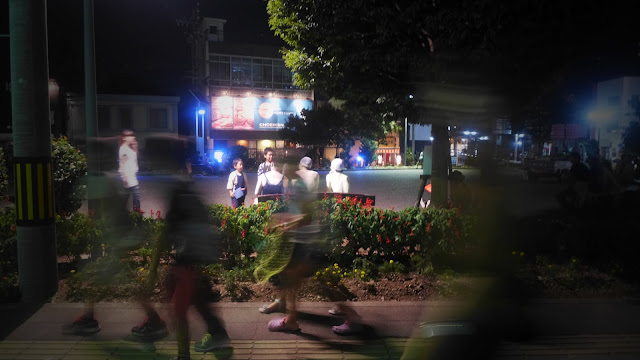 On the final day of the festival, hunabi is the word. Community members clasp enormous smoking fireworks as offerings at the local shinto shrine. In the evening, an unbelievable firework display lights up the night sky for over two hours. Chocolate bananas are served under tents and the McDonalds has a line out the door. 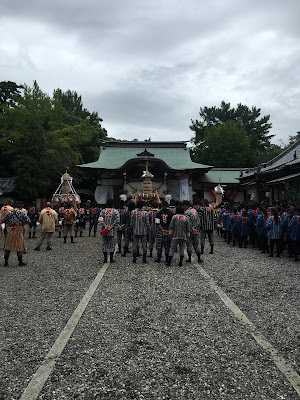 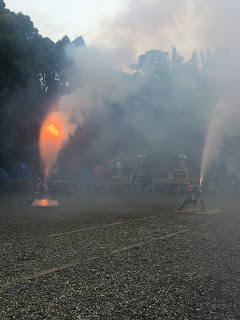 The community of Tahara is excited to share their history with visitors. They are also thrilled to show off an amazing eco-friendly electrical grid. Solar panels and wind mills dot the landscape, hugged by the Atsumi Bay and Pacific Ocean. At the top of the Mt. Zao, a giant turbine reminds visitors that almost 30 percent of the homes in Tahara are powered by renewable energy.

The observatory on Mt. Zao has a glow-in-the-dark celestial path that leads up to a sleek yogurt shop. It's the perfect place to enjoy the fireworks and watch Tahara's matsuri traditions as summer loosens its grip on the region. 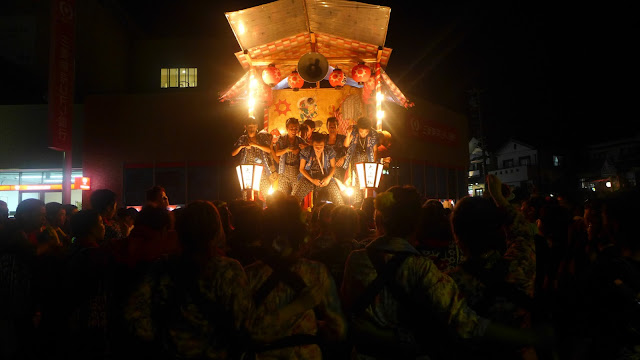 Posted by ekrunk at 7:48 AM No comments: