It’s a sweltering summer in Kagoshima, but I endure the heat so I can explore Chiran’s historic samurai village. The thoroughfare of immaculate zen gardens, private estates, and tea houses was once the property of Japanese warriors, or bushi, who provided protection to locals and grew green tea for profits.

The quiet streets, with their stone fences and Edo-era homes, lack telephone wires, electrical lights, or any fixtures from our modern age. The neighborhood is exquisitely preserved and remains like a doorway into the country's past. 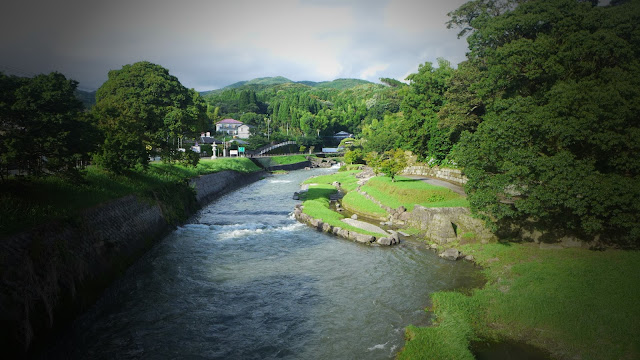 During World War II, Chiran housed one of Japan's largest airfields, where over 1,000 kamikaze pilots gave their lives to the Imperial Japanese Army. The town recognizes this tragic history with an incredible museum and citywide memorials that champion peace and commemorate the lives lost. Stone obelisks, each dedicated to a kamikaze pilot, line the town's main street where a stream flows alongside laundry mats, suburban homes, and convenience stores. Koi fish peck at the surface as tiny water wheels revolve with quiet perseverance. Reaching above Japanese pines, a watermill grinds wheat flour into udon for hungry locals at a family restaurant. 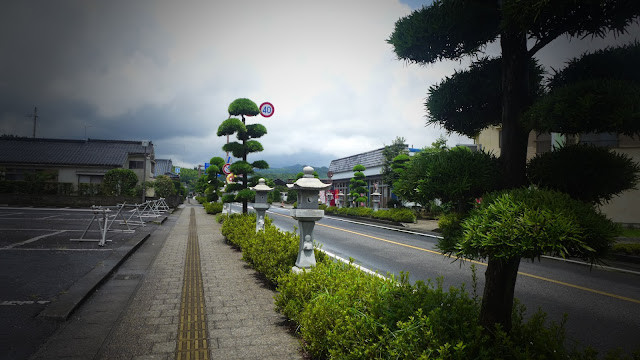 With its spellbinding samurai district and magnificent natural landscape, Chiran is like a fairy tale. I'm even more certain of this as I visit Toyotamahime shrine, where an annual puppet show materializes out of the magic of Edo era mechanics and the flow of Chiran's river. 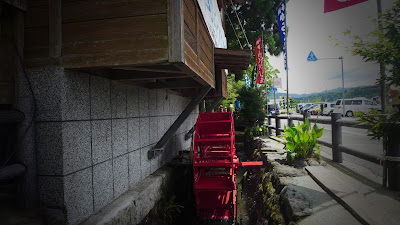 Walking down the narrow steps into Chiran's Water Wheel Karakuri Ningyo Theater, I feel like I am crawling inside the interior of a cuckoo clock. A tiny toy boat glides above my head from a wooden chain as I shimmy through a wall of hand-carved gears and oscillating cloth strings. Through a window I can see the water wheel faithfully spinning outside, setting thousands of pulleys, gears, and ropes into synchronized motion. Underneath the stage, with the creaking sound of do-it-yourself machinery, I have the sense that the entire theater is inching forward across the Pacific. It's like the bilge of a steamboat or a lost contraption in Willy Wonka's factory. 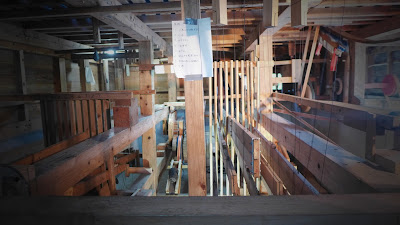 Above my head, there's a war breaking out. This year's show is a reenactment of The Battle of Ichi-no-Tani, where Kojiro shoots his legendary bow and arrow, samurai clash, and an anthropomorphized octopus happily swings his tentacles to prerecorded music. 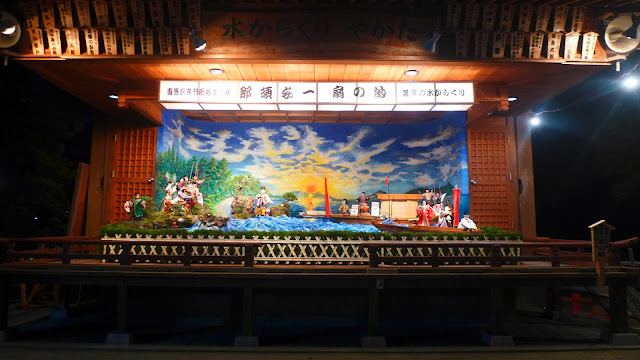 The last time Chiran's Water Wheel Karakuri Ningyo Theater performed this production was in 2005. They have a repertoire of 11 shows and present just one a year during the second week of July. 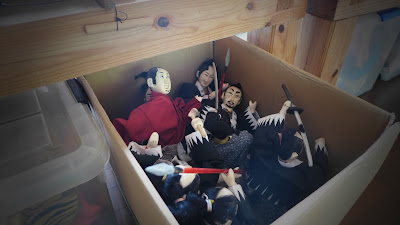 Other stories include the tale of Peach Boy, also known as Momotaro, and a fantastical myth about moon-dwelling rabbits. Each production has a script that resembles an engineer's blueprint, filled with notes, diagrams, and pictorial specifications. 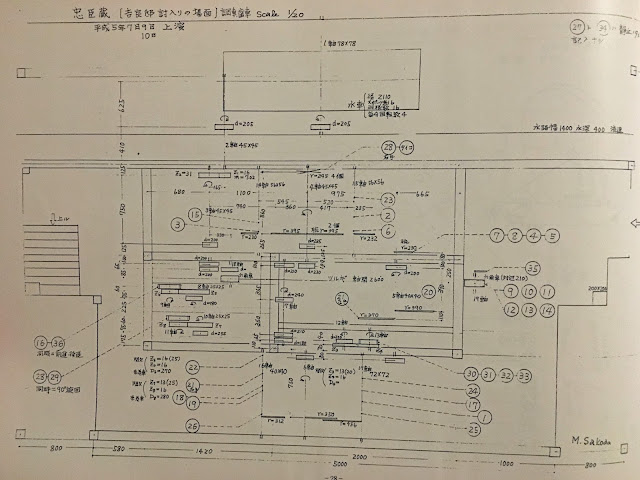 It's not just a matter of taking the puppets off the shelf and following these century-old instructions. Throughout the year the large studio on the shrine's grounds stays busy as volunteers fabricate new set pieces, puppets, and mechanisms for the summer production. 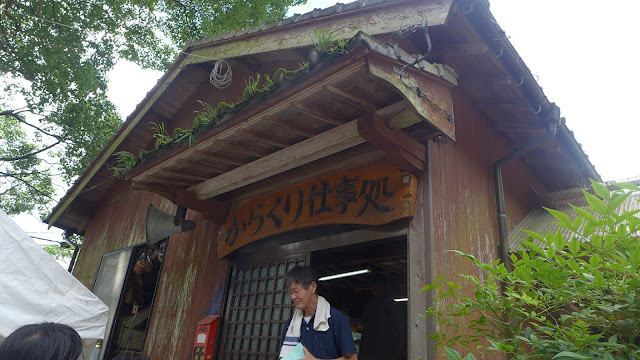 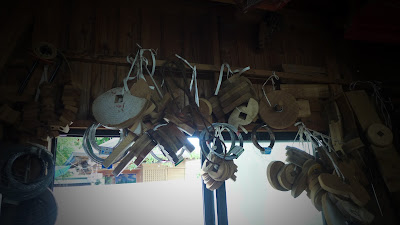 Modifications are encouraged—as long as electricity isn't involved. Perhaps due to the scarcity of water wheel theaters, the group escapes the rules and customs usually ascribed to festival karakuri ningyo. Instead of a cohesive traditional aesthetic, the design of the show is like patchwork, stitching together 18th-century puppets, paper mâché, plastic tarps, and repurposed gardening supplies. 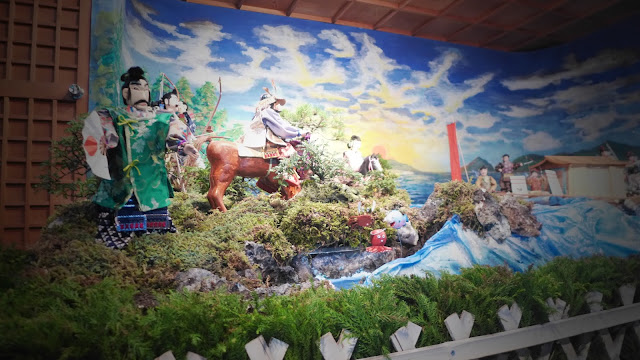 In 17th-century Japan, these robotic spectacles were more prevalent. Shrines across Japan housed water wheels specifically for operating automated puppet shows. A few hours north of Tokyo, Kiryu City held annual competitive festivals where robotic puppets reenacted famous legendary wartime battles without any human exertion. Today, many of the water wheels stand motionless in shrines across Japan, mementos of a bygone era of hydromechanical ingenuity. As of 2017, only two operational water wheel theaters remain, both of which are in Kagoshima: Takeda Shrine in Kaseda, and here, Toyotamahime Shrine in Chiran. 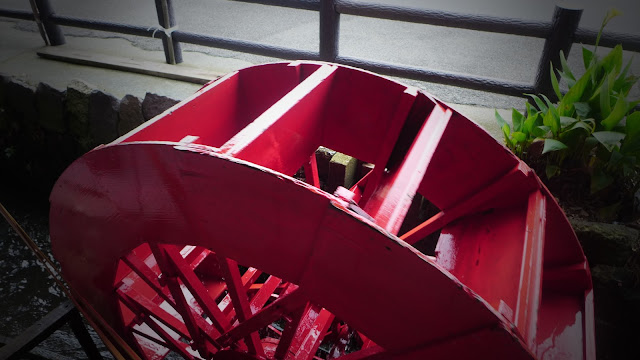 A group of about thirty members gather around a long table, or chabudai, and pass around adzuki bean popsicles. It's almost a scorching 40 degrees Celcius, but no one is complaining. The weather forecast predicted rain, but there's not a cloud in sight. 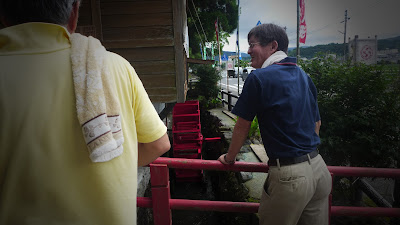 As a precaution, a tent covers the seating area filled with children, families, and older residents who have attended this annual performance for their entire lives. The two-minute show plays on a rotation for the whole day as townspeople snack on onigiri, pray at the shrine's altar, and catch up on the lives of their neighbors.

During most karakuri ningyo shows in Japan, the audience waits with rapt attention for the puppet to perform its final transformation or an awe-inspiring feat. However, Chiran's performance is less demanding.  The show's repetition and partnership with the natural world create a performance that blends seamlessly into the landscape. The sound of the rotating water wheel, the squeaking gears, and the pulsating movement of a sword-wielding puppet all mingle with the everyday melody of life. It's impossible for me to tell the difference between the call of the summer's cicadas and the hum of winding springs. 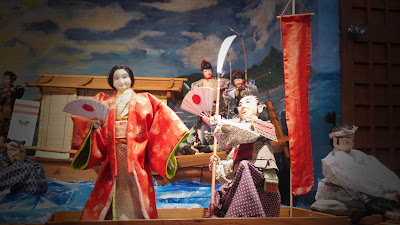 When leaving Chiran, I feel like I understand the formula behind this town's magic. It's a community that preserves its extraordinary Edo Era history, while it also acknowledges and transforms tragedy into a call for peace. It merges the natural world into everyday life. The puppet performance coordinates with nature, art, and history. Observing the small town gathering at the local shrine to watch their shared mythologies conducted by a river and 300-year-old mechanics is one of the most moving experiences I've had in Japan. Chiran's Water Wheel Theater accomplishes something remarkable. Like the city itself, it reminds us that by finding harmony with our past and the natural world, we can live in the magic of our present. 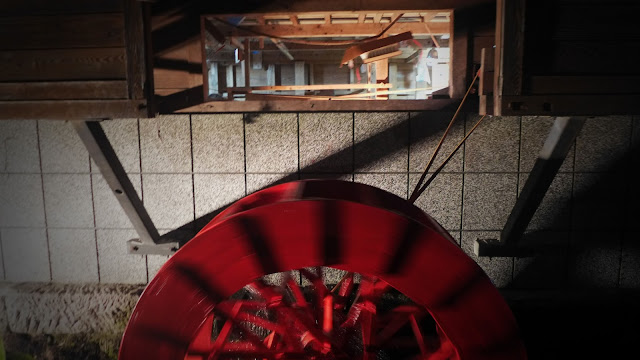