As I head to Kyoto Station from Otsu Matsuri, I have a deep suspicion I'm not going to make it to Takayama Matsuri. I’m certain I'm on the wrong platform, even as I watch the corresponding trains pull into the station. On the bus from Nagoya to Takayama, I convince myself I missed my stop and I'm actually headed to Hokkaido's most northern tip. What if I lose my wallet? Or the train never shows up? This anxiety was anticipated. I am headed to one of Japan's most legendary karakuri ningyo shows, and it's only performed on one day of the year. If I miss this - that's it. But I'm in Japan - where wallets are usually returned and a late train is a mythical legend. Of course, I arrive in Takayama right on time.

As I make my way through the thousands of tourists to my ryokan near Hachiman shrine, the city puts me at ease. Despite the crowds, Takayama's beauty and charm is intoxicating. The city feels wonderfully timeless, combining Edo Period architecture with sprawling glass storefronts that reveal ultra-modern wooden furniture and stainless steel home goods. Glossy Post-War diners with Art Deco signage share the streets with 16th century sake breweries. Despite Takayama's blend of contemporary style and historic buildings, nothing feels out of place. If anything, Takayama reveals the ageless aesthetic of Japan's minimalism and its influence on modern design.

As night falls, the dashi, or yatai as they are called in Takayama, parade down Yasukowa Street. A coalition of fantastical lions leads the dazzling cavalcade. The mouths swing open and snap with electrifying cracks that complement their wiry hair and devious grins. 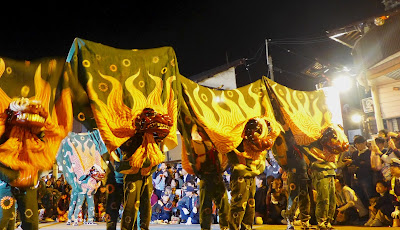 The lions' heads and bodies are manipulated by teams of teenage boys, who balance wild energy with perfect harmony. Despite the frenetic energy, the puppeteers are possessively committed. 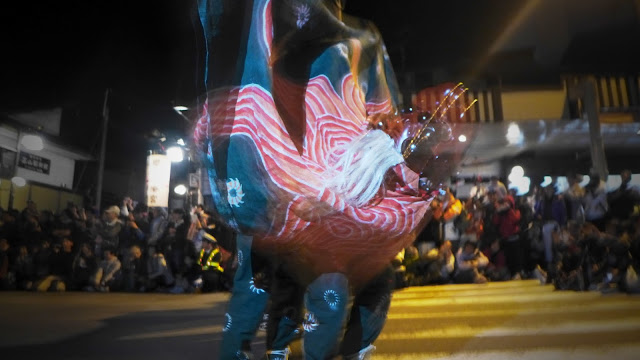 Unlike other festivals, where teenage participants are celebratory and carefree, these young puppeteers are focused. In their dedication, you can see their fathers, grandfathers, and great-grandfathers who once performed the same custom. They don't just carry the the paulownia carved lion masks, but the weight of Takayama's history. 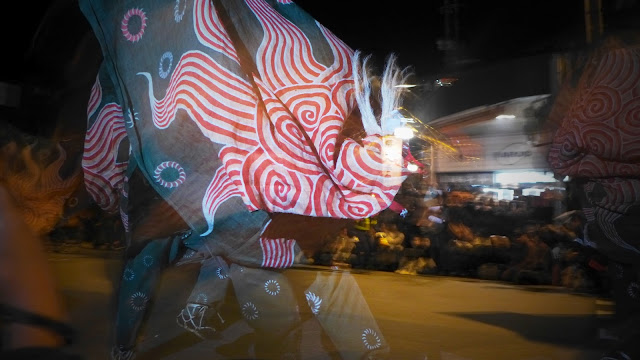 The eleven yatai stretch across the main street and greet visitors with magnificent grandeur. 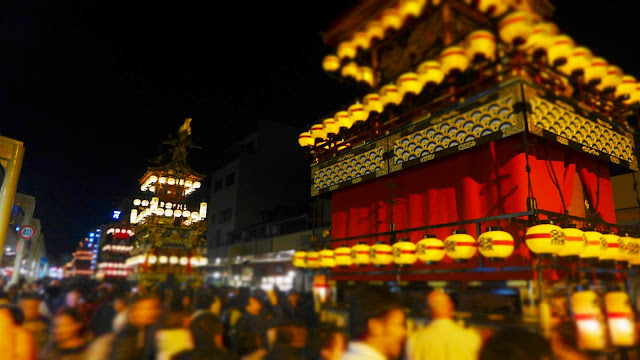 The ohayashi and kajikata gather around the floats to prepare for the evening procession, as awe struck tourists travel from yatai to yatai. 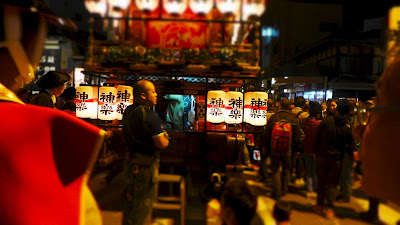 The illuminated floats are hypnotizing. The amount of resources needed to create this timeless wonder is staggering, and set against an international crowd of over 100,000 open-mouthed onlookers, it feels like a World's Fair. 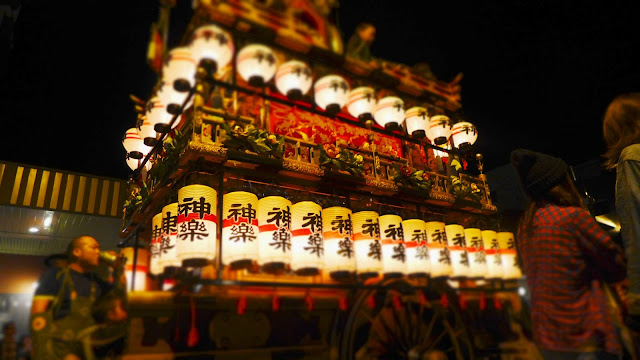 It's the the pursuit of aesthetic pleasures against the logic of an economist. But it pays off. As the floats journey into Takayama's historic neighborhoods, their beauty grows even more enchanting. 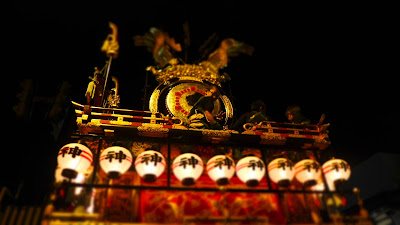 The boroughs of Takayama are magnificently preserved in Edo architecture. Exposed running water straddles the streets, vending machines are obsolete, and hundreds of paper street lamps illuminate the road by flame. You are experiencing the town and festival almost the same way a visitor would have 350 years earlier. 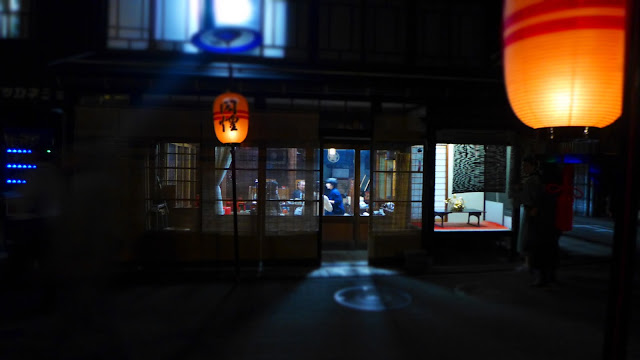 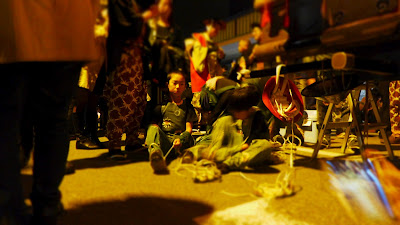 The next morning, on my way to the fall festival's karakuri ningyo performance, I am met with Takayama Matsuri's procession, or keitoraku. In the procession I discover the generations of lion performers. 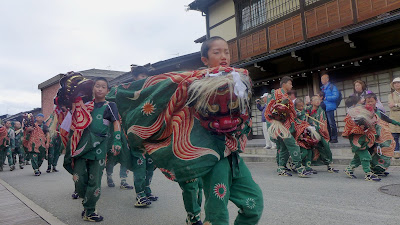 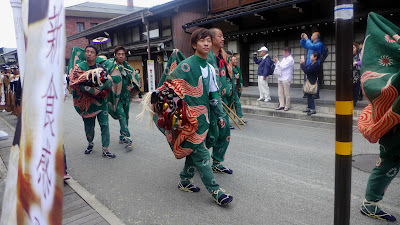 Because they're primarily operated by strings, Takayama's mechanical dolls are often translated to marionette, but in Japanese they are called karako. There's an air of secrecy in the rehearsal and set-up process. 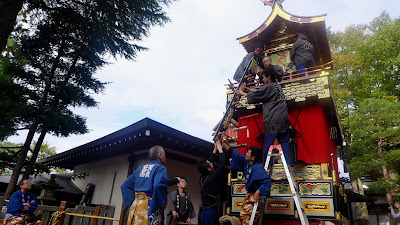 A large embroidery shrouds the yatai's bottom tier and the response to foreigners trying to get an inside look is tepid to say the least. However, a few young boys come and go with the privileges of VIP. These are the future puppeteers, who drink juice boxes, and hang their feet over the edge of the yatai admiring the large audience. 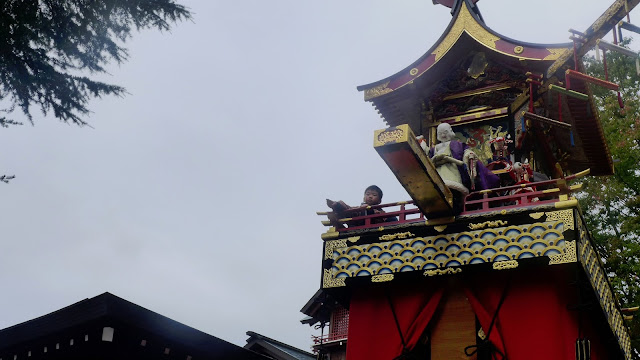 The yatai is docked at Hachiman Shrine, and two hours before the performance, there are already at least three hundred spectators crowded around the 3 story float. I am lucky to receive a seat at the very front of the performance. Despite the enormous audience, people are careful not to stand in front of the sight lines of others. At one dramatic turn of events, the entire audience grows silent as a gentleman walks in front of the crowd and sets up a tripod. A few members start to shout. They've waited an entire year for this performance, they booked their ryokan months in advance, and they arrived three hours early to get a good seat. An irate audience member tosses his tripod, another man shouts, and eventually the photographer is escorted away from the scene by a friendly police officer. It's the first time I've ever witnessed a fight for seats at a puppet show.

The performance is packed full of miniature stunts that culminate in a grand feat of pure puppet glory. The god of good luck, Hotei, greets the crowd from the toi. An acrobat flips his way across a trapeze, and then hops onto the shoulders of the gregarious deity. Another acrobat follows behind. At the end of the show, Hotei dances around the track with the two acrobats on his shoulders. Once you think things couldn't get much more wild, Hotei spins in circles, opens a fan, and releases confetti to the crowd below. 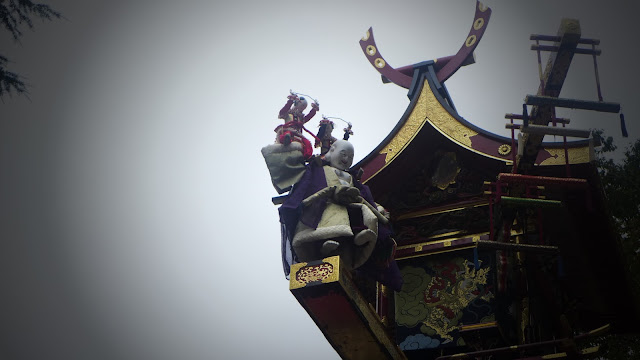 I stick around Takayama for a few more days to explore the city's karakuri ningyo museum. The gallery offers daily karakuri ningyo performances. There is an over-sized calligrapher puppet, two robotic dolls that sword fight while balancing on columns, and an acrobat who swings across the stage. 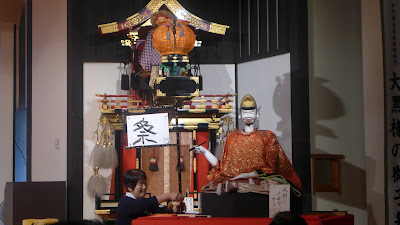 But like a "best of album", these shows lack a certain magic. When watching a traditional festival performance, you're in a rambunctious dialogue with history, the city, and performers. Like the young lions dancing through Takayama's historic downtown, context makes these experiences more wondrous.

Is there anything in The United States that comes close to the rich interplay between community, history, and performance? Often, American parades and festivals feel like they run on borrowed time. The institutions remain in control, instead of allowing the festival to roam freely. This prevents festivals from creating a type of celebratory other-worldly escape. In the U.S., a city festival usually means your town’s most notorious realtor is waving from a pick-up truck while a few puppets parade around the local library. But we can’t help it - for the most part, we lack a historical context for festival performance.

There are a few exceptions - Mardi Gras for example.


Perhaps the most notable exception is Bread and Puppet, which I thought of frequently while attending Japanese Matsuri. Like Japan’s festival tradition, Bread and Puppet obscures the lines between community and performance.

Many of the puppeteers live on the Vermont farm, performing communal duties and engaging in a strict rehearsal regime. Like the matsuri communities, the Bread and Puppet farm and theatrical spectacles work in tandem. The shows feel as organic as the Vermont forest that surrounds you. Bread and Puppet has also been around long enough to draw from a substantial history. The theater group developed its own unique language of iconic characters and physical gesture. It keeps aesthetic guidelines and holds on to its historic traditions while remaining political. This makes it feel timeless, and, like the Japanese matsuri, ritualistic.


Back in Takayama, I watch as the floats are loaded back into garages throughout the city, and look for a spot to grab a cup of coffee. Many of the restaurants and souvenir shops are closed and have taken a well-deserved holiday. Even though the streets are empty, its the kind of place you don’t want to leave. 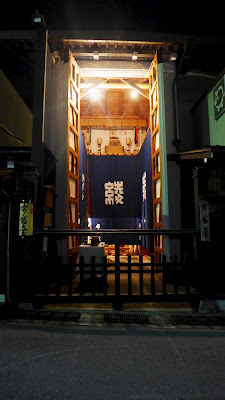 Like the yatai hibernating in their garages, I feel like sticking around till Takayama’s spring matsuri but instead, I’ll just have to take another train. Chances are high I’ll get back on time. 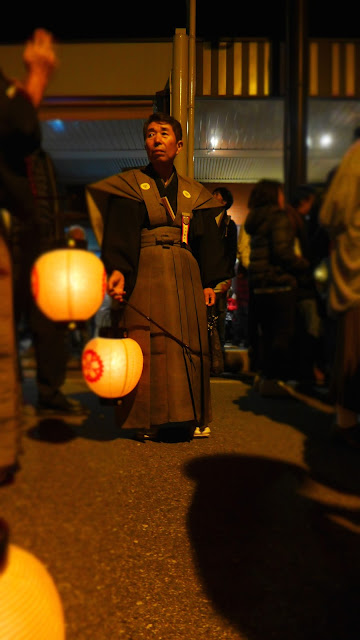 For more information on Bread and Puppet please visit: http://breadandpuppet.org/