On the day of Nagoya Matsuri, I walk the streets around Nagoya Castle with my mentor, Yasuko Senda. Traffic has been redirected due to the festival, so today this iconic Japanese landmark feels more like a sanctuary and less of a major urban attraction.

On a typical October afternoon, taxis line-up with eager tourists as young men stroll the grounds cosplaying as Edo era samurais. This theatrical fad has sparked admiration from teenage girls, who often come out in large groups to take photos and interact with the sword wielding thespians. This trend of Edo era recreation is mirrored by the castle itself. The majority of the historic monument was reconstructed after being demolished by American air raids during World War II.


The attacks didn't just destroy the 17th century castle, but a quarter of Nagoya's structures, thousands of human lives, and countless cultural artifacts, including the dashi and karakuri ningyo puppets that were the hallmark of Nagoya's original matsuri, Toshogu Fetival. 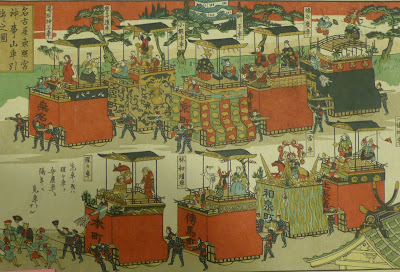 During the Edo Period, puppets were recognized as a bridge between the human and spiritual world. Bunraku stems from the shinto ritual of ebisu-mawashi, where puppets serve as vehicles to eliminate impurity and grant good fortune. Karakuri ningyo puppets, operated on top of 6 meter dashi, are considered channels to the transcendent. These performative practices wade through darkness to reach the intangible. However, in 1945 the human world rendered these devices spiritually and physically powerless. After World War II, one of Japan's oldest festivals, Toshogu Matsuri, was discontinued and ritual puppetry went quiet for decades.

In Nagoya, the destruction from War World II was paved over by large efficient highways, modern skyscrapers, and pachinko parlors. Compared to Japan’s other major cities, Nagoya feels extremely new and many signals from the past are difficult to discern. It's easy for outsiders to spend weeks in Nagoya without recognizing its trauma from World War II. 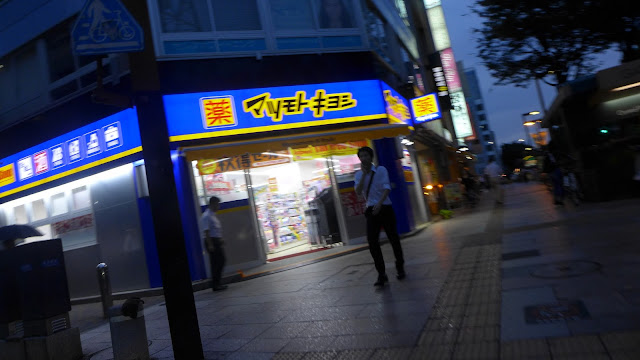 Yasuko Senda was a young girl in Nagoya during the Amerian air raids. There's a part of me that wants to ask about her experiences - but the issue always feels too complicated to broach. Instead, we talk about puppets, and spend the afternoon watching Nagoya's karakuri ningyo performances. 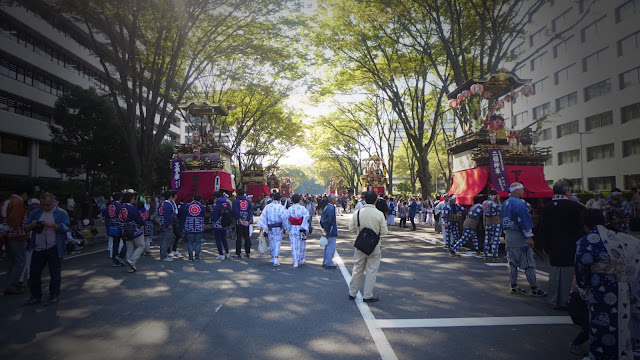 One month later, I am sitting in rehearsal for Niwa Gekidan Penino's original production Avidya: No Lights Inn when I read the results of this year's election.

The play is the creation of psychologist turned theater director Kuro Tanino. On the stage, a blind man, Matsuo, played by Hayato More, nervously makes a cup of a tea for the Inn's newest visitor, a three-foot itinerant puppeteer named Kurata.

"Some say the blind are closer to the mind's eye." Matsuo tells Kurata.

I stare at my phone as anxiety sets in. I grow hot. My heart races.

Kurata lights a cigarette. The actor, Mame Yamada, captures a lifetime of unsettling melancholy with a single puff. The clouds of tobacco rise across Tanino's highly detailed and Kafkaesque set. I think about my mom, who admired Hillary more than any other public figure. For my mother, she was a symbol of self-worth, and the pursuit of a dream in the face of ridicule. She would have looked to Clinton’s victory as a reconciliation with unjust pieces from her own past, and in many ways, I looked towards the election to reconcile some of the grief from my mom’s passing.

"What will you do when you see it? Your spirit?" Kurata asks Matsuo.

Matsuo is caught off guard. He drops his cup of tea against the table.

Often, I look at this fellowship the same way. I imagine there will be answers to plaguing existential grief waiting for me at Ise Shrine, or a farm village theatre in Tokushima. These opportunities bring me to new worlds — I discover new ideas. But instead of resolve I once expected to find, I'm met with only more questions, and perhaps that is the only resolution I should expect.

In Avidya: No Lights Inn, Kuro Tanino has created an unsettling world. The suspense digs into deep-rooted feelings of anxiety. The play is pushed inside a magnificent oversized dollhouse, where actors appear in highly-detailed rooms like distressed fish in an aquarium. As I move between my phone and the play, my reality blurs between the two. The show spills from the stage and illuminates the dread that's been lurking this whole time. 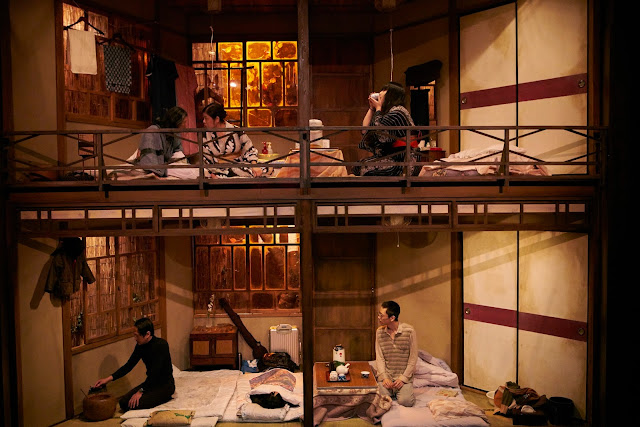 
Avidya is a Buddhist concept that translates to “ignorance." It's a refusal to accept the world's impermanence and our fixed state of anguish.

I stare at my phone, my Wifi reception spotty, as I refresh the news feed over and over.

Kurata and Matsuo sit naked in the inn's hot spring. Surrounded by rocks and flickering candles, Kurata whispers to Matsuo, "The spirit you seek, does not exist".

Suddenly, Kuro-san turns to me from the house seats. "Trump?" he asks. "Trump?" he holds up his phone with the United States colored in red swatches.

In order to reach Buddhahood, Matsuo explains, you must surrender your ignorance and face the darkness.

I fear returning for opening night. But I do, and with a couple hundred other people, we confront the dark together.

Avidya: No Lights Inn takes us into a world in-between reality and a dream. Here, transcendence isn't pleasant. And although it’s theatrical, bizarre, and in another language, Avidya holds more truth for me than the last two years of news, history books, or commentary from political pundits combined. 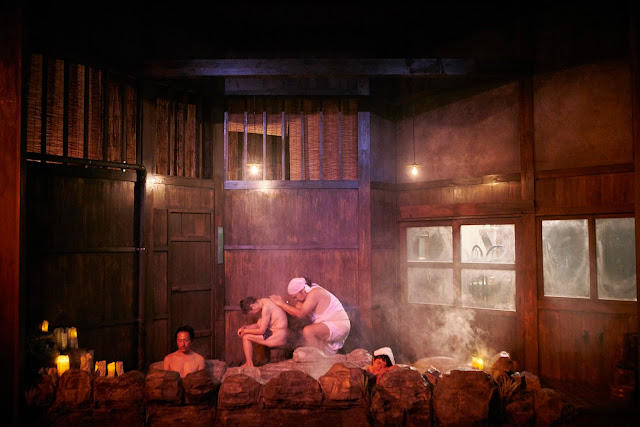 After the performance, a group of American spectators ecstatically compliment Kuro Tanino on his show. At the after-party, festival directors are pleased, the cast is excited, and the drinks are plentiful, but Kuro Tanino looks shaken. As actors joke over shared dishes of spicy tofu and Chinese noodles, he keeps returning to the chair next to mine. "Where does America want to go?" he asks over and over. "I don't understand."

Kuro Tanino created a show that wrestles with darkness and swims around in a wonderfully dreadful dream, and yet the American election left him clearly troubled.


But theater never promised answers like our political system. Instead it creates a place to linger in fleeting transience. It takes us into the dark, where we'll momentarily relinquish our ignorance, and stumble around, hands out-stretched, fumbling to find each other. 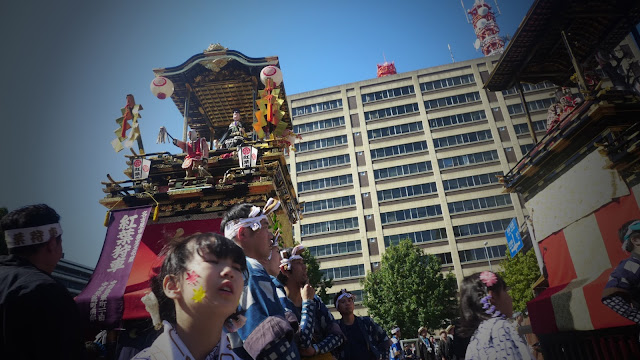