It's almost midnight when I arrive back to Nagoya from Toda Matsuri. It's Saturday night, and while groups of young people head out for a night in Naka-Ward, I take the elevator to the eighth floor of my apartment building, eat green tea ice cream and fall asleep without flossing.
At 9:00, I put on my headphones, turn on Fresh Air with Terry Gross, and take the train from Nagoya Station to Tsushima. I keep Google Maps open on my iPhone, but it's impossible to miss the stop. The dozen or so dashi tower above the Meitetsu subway line and can be seen from a mile away. 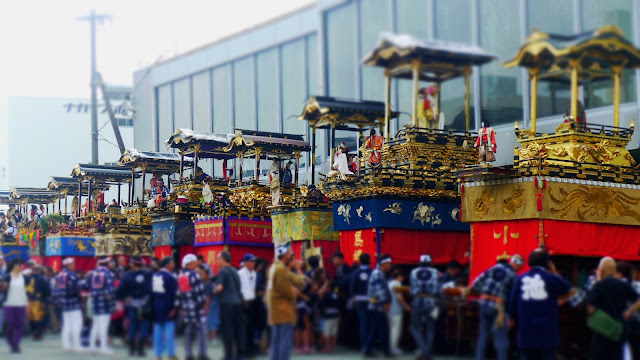 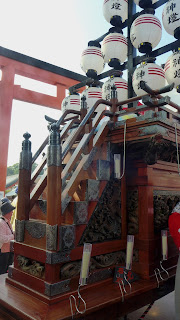 A chorus line of golden floats greets the arriving visitors to Tsushima in a vast concrete parking lot. Like royalty, they remain fifty yards from the crowd, protected by barricades, cameramen, and police officers. Unlike Toda and Tahara Matsuri, this is the type of well known festival that gets pictures in Lonely Planet guidebooks and shows up on the top of Trip Advisor message boards. There's 13 dashi, each with karakuri ningyo, and an additional fleet of six majestic 18th century floats that ferry enormous taiko drums. Embellished in silver plating and detailed cypress accents, these smaller floats look like miniature trireme ships with the main mast shouldering rows of Japanese lanterns. 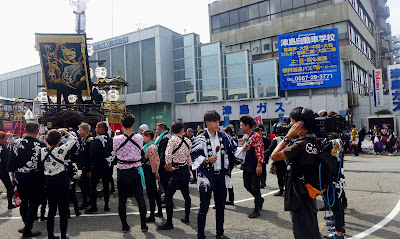 Groups of Japanese twenty-somethings surround the floats in matching matsuri uniforms, trading jokes and greeting their friends with cold beer. They announce the start of the festival with fierce thumps on the taiko drums. But these thumps don't stop - they continue in rapid succession, shaping the rhythm for the next two hours. 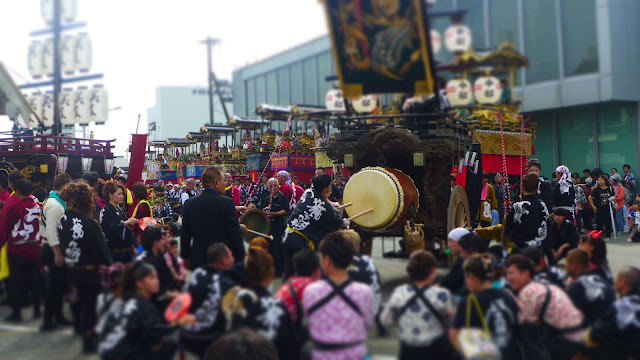 As the music picks-up, it becomes more infectious. The men start to jostle each other towards the taiko drum as the girls hammer on Japanese cymbals known as chanchiki. In Yokosuka, the Japanese flutes and shamisen were stars of the festivals. In Tsushima, they're discarded for the thud of the taiko.

The cries of sports whistles joins the ensemble as the drums hasten. I'm convinced the sounds are about to reach a final coda, but like a musical magic trick, the drums loop into a never-ending crescendo. Men wrap their arms around their neighbor's shoulders and fall over each other in a musical daze. Perhaps the barricades aren't to protect the dashi from the audience, I think, but to protect the audience from the musicians.
As I watch a girl with purple hair extensions drink an enormous bottle of sake, it starts to feel like I'm watching a party from the front lawn. The mood inside is feverish, pulsating, and exciting - out here, beyond the barricades, it's just kinda hot. 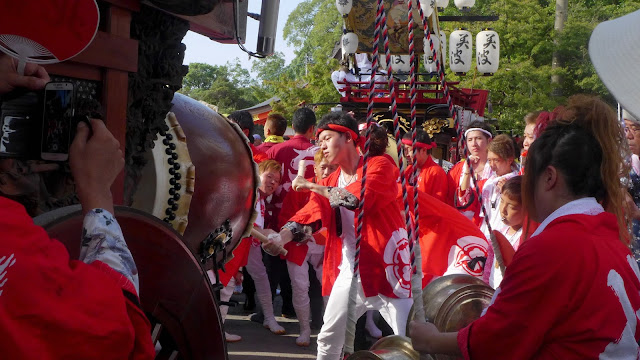 Like a sail rising from the mast, the ebony floats unfurl embroidered canopies and cruise down the main street towards Tsushima Shrine. Groups of adolescent flute players gather on the dashi's first tier and strike up their orchestration, as the floats start their journeys towards the other end of the street. But this half-a-mile stroll is no intermission - it's the main event: a two hour celebration filled with twirling dashi and roaring music. The entire street is filled with lines of spectators, as the 5 ton dashi are rotated 360 degrees over and over in looping madness. 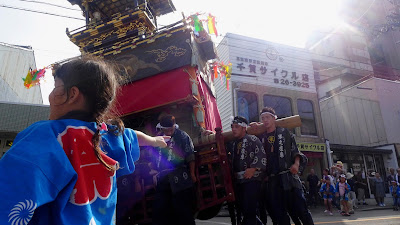 At one intersection there's a dashi turning competition, known as a donden, where the floats are spun six, eight, then ten times in a row. 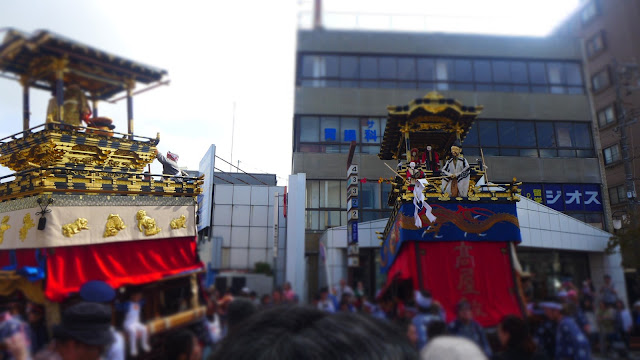 The men spinning these ornamental mammoths never rest. I see one grab hold of the side in an exhausted stupor, while another lets out a scream as though possessed. 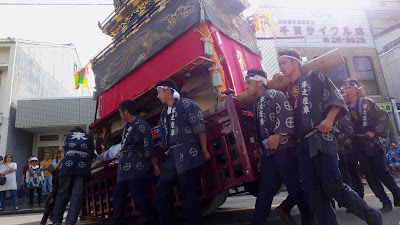 One man stands on top of a float and tosses what looks like brightly colored mochi into the crowd. People are going crazy, waving their arms and shouting for his attention. This must be some delicious mochi. One is thrown my way as an elderly woman knocks me out of the way, effortlessly seizing it between her hands. It's not mochi - but a bright yellow towel. Oh dear, I exclaim, as I have a disturbing flashback to a Pittsburgh Steelers game.
At the gates of Tsushima shrine, the taiko drums and chanchiki have reached a new stage of intensity. I watch as a laughing teenage boy steps forward to seize a bachi and take the helm of a taiko drum. His face transforms into stony-faced attention as he skillfully pounds away and feeds the hungry participants.
By 16:00, I'm starting to feel a bit weary, but the musicians and kajikata aren't showing signs of slowing.  A man hangs from the float, clanging a chanchiki close to my hear, as I try to spot the closest bathroom. It's clear, Tsushima Matsuri is way more punk rock than tourist attraction.
The karakuri ningyo performances will take place inside of Tsushima Jinju. The shrine's main tenant is the deity of pestilence and blessings, Gozutenno; however, it also houses over 100 smaller deities throughout the sanctuary. The bright red torii provides a breathtaking backdrop, as each dashi moves center-shrine one-at-a-time to offer its show to the jinju's spiritual dwellers. Similar to the set-up at the train station, the audience watches the karakuri ningyo from about fifty yards away. 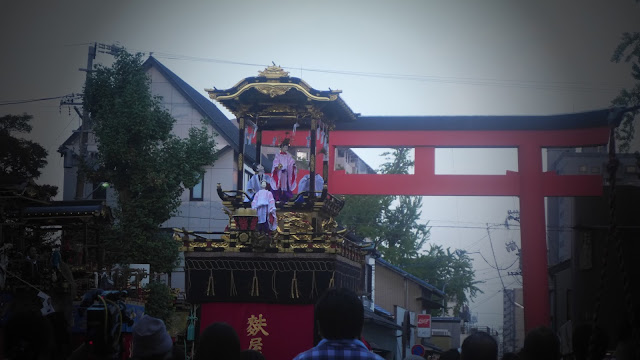 Each dashi has a puppet that stands on the lower tier and waves a shinto gohei prior to the performance. The floats have remarkable details. The roof on one dashi ascends from a trap door, magically revealing the top tier's karakuri ningyo .
In one show, a woman dances across the stage as her face transforms into a orangutan, back into a woman, and then a orangutan again for good measure.


One of my favorite performances was created by Tamaya Shobei V in 1887. Two puppets stand upstage as another moves center and transforms into a boat. Like a Toy Theater show, two-dimensional waves extend from the bottom of the stage and rock back and forth as the boat's miniature sail flaps in the wind.

In the final karakuri ningyo act, a shinto priestess, or miko, approaches a cauldron that sits on the end of an overhanging eight foot rail. This is one of the first dashi I've seen with an external track, or toi, that lets the puppets move outside of the float. It's incredibly effective, as the miko waves a palm branch towards the audience in a cleansing ritual. At the end of her ceremony, paper flies out of the cauldron in a magical burst. But as I watch the confetti fall to the empty ground below, there's a part of me that wants to be closer.


During the thirteen performances, my thoughts drift to American politics, ice cream, and health insurance. I watch Tsushima's calligrapher puppet and compare it to the one last night in Toda (not nearly as impressive). I start to shape a to-do list for the upcoming week when I realize my problem - the physical distance between me and the floats have made it easier to take up residence in my own head. I remind myself to be present. Most of the karakuri ningyo are marvelous, and I feel lucky to have attended. But it's worth noting its the first time I've felt like spectator instead of a participant. 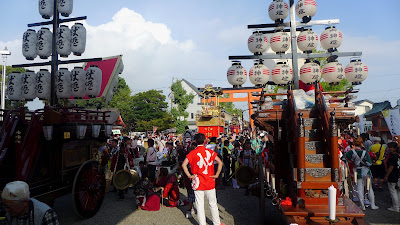 What I usually love about karakuri ningyo and Japan's matsuri culture is the blurring between audience and performance. The theaters physically move through the crowds and travel through narrow streets. They're indifferent to where you stand, and don't mind if you gawk a few feet away at their ornamental beauty. As the oyahashi and kajikata spill past, you're impelled to follow behind.

It's never felt like these towns are hosting the matsuri; the matsuri hosts the city. This ambivalence towards an audience and simultaneous invitation to join-in gives the viewer no choice but to participate. When you're standing inside of a crowd, chasing after a roaming theater, watching mechanical puppets perform magic tricks while the person next to you gasps with delight, it's easy to forget about the stuff inside your head. You're invited to the party. 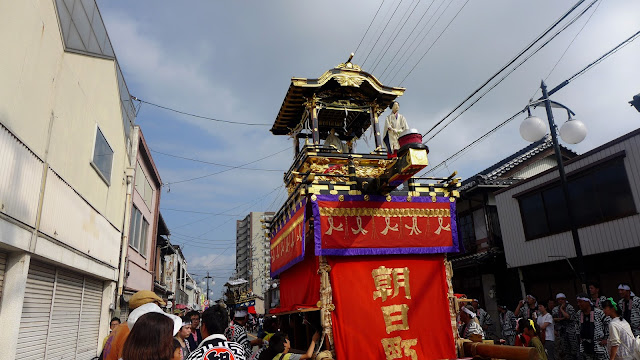