A group of elementary school students endlessly air-drum beneath the festival's dashi. They don't want to miss a note during tonight's performance. At Toda Matsuri, most of the musicians are children who have spent the last month of music class in preparation. 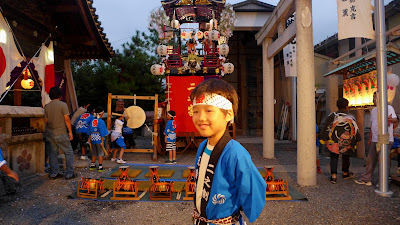 The audience is made-up of parents, proudly poised with digital cameras, and younger siblings who run freely through the shrine while grasping cotton candy. Sure - it's not a large crowd, but there's something so pleasant and comfortable about the small-town atmosphere in Toda that I catch myself singing The Gilmore Girls' theme song aloud to no one in particular. 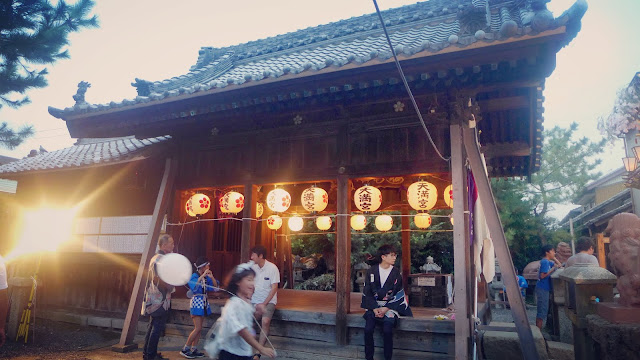 I spend the afternoon at Hachiman shrine with a festival organizer, Mr. Yamada. Even at seventy three, Mr. Yamada climbs through the three-floor dashi with ease. 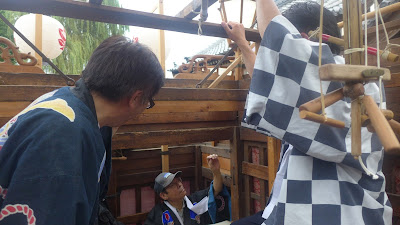 He is excited to speak English, share the shrine's history, and show off his fresh surgical scar from kidney surgery. Asahi beer cans, plastic containers of curry, and cigarettes line the edge of the 18th century dashi, as I climb on board and head to the second floor. The puppeteers are easy-going, but the karakuri ningyo is anything but simple. The puppet’s controls are a mix of strings, handle bars, and the sashigane technique I observed in Yokosuka. 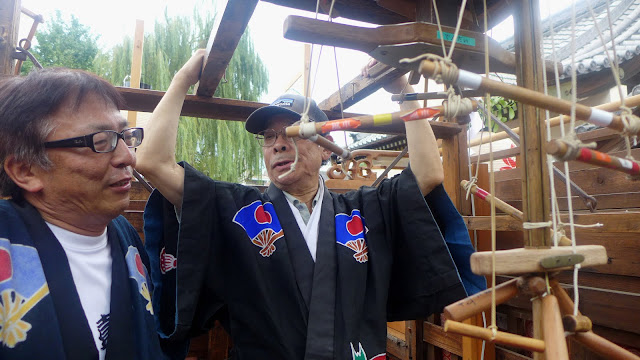 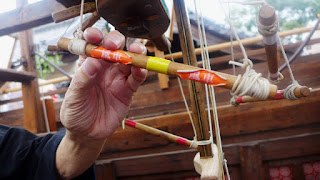 To make things manageable, the puppeteers place brightly colored labels on each handle, and wear battery-operated headlamps during the performance.

Mr. Yamada explains that the puppets suspended above our heads are milling rice. The two robotic farmers rotate the mill with hand cranks, while a miniature acrobat stands on top. After a full rotation, a stage extends from the center of the mill and the puppet leaps into an impressive hand-stand. To Mr. Yamada, this performance captures the essence of Toda. "Rice Milling is Toda's main manufacturing," he says, staring upwards at the wooden puppet. 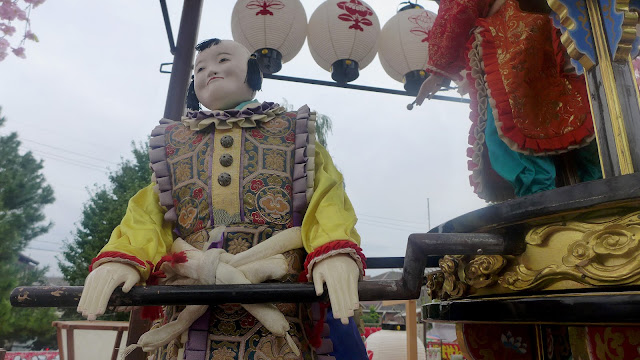 A 24-hour automat for uncooked white rice sits outside the shrine and one the most popular fair food this evening is dango (sweet rice dumplings). Rice is Toda's livelihood, and these three mechanical dolls give thanks to the gods who have granted it.

Toda's dashi is not as ornate as those in Yokosuka and Tahara, but they are some of of the oldest I've seen, dating back to 1702. A school teacher announces the performance on a portable karaoke machine, as the students gather into a shapeless circle, shyly hiding from the gaze of their families' cameras. Two grandfathers sit on the edge of the chozuya, or shrine fountain, smoking cigarettes and watching the puppeteer make final adjustments to the karakuri ningyo. 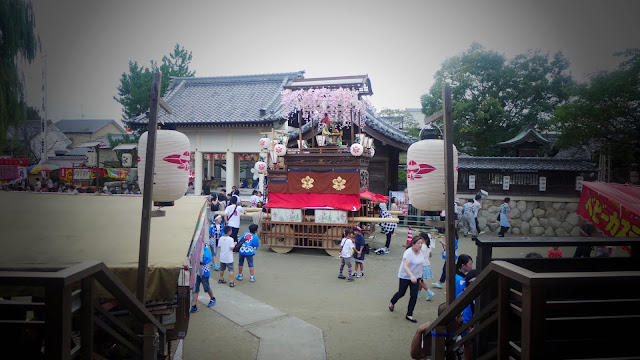 Despite the casualness of the festival, the performance is excellent. The manipulation is smooth and well-rehearsed. And even though the ohayashi is a group of elementary and middle school students, their music reflects the puppets' movements well and creates a unified spectacle. 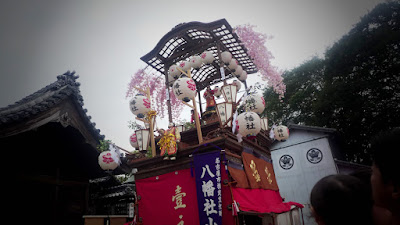 The kids don't want the show to end. As the audience applauds, they gather around the float with their instruments and continue to play. The puppets join in, waving their arms, milling rice, and nodding their heads to the music below.

My guide this evening is a first year college student named Daiki. We search for the next karakuri ningyo performance at Tenjisha shrine as he tells me about his first semester in dental school. We walk through Toda's dark and narrow alleys with only the light from Google Maps and a few flickering Japanese lanterns. It's one of the first chilly nights of autumn, and traveling the streets, moving from shrine to shrine, it starts to feel a bit like Halloween."Have you seen Gilmore Girls?" I ask Daiki. He never heard of it- but he is a big Bruno Mars fan. 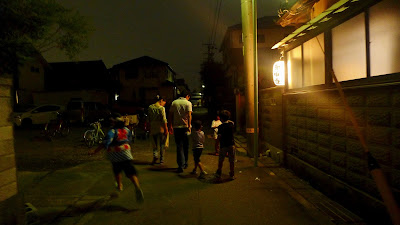 We catch the glow of a dashi in the distance, give-up on Google Maps, and follow it.

Two rows of children sit behind kotsuzumi drums. The music teacher provides some last minute instructions as a dozen young boys line-up in front of the hanging taiko. 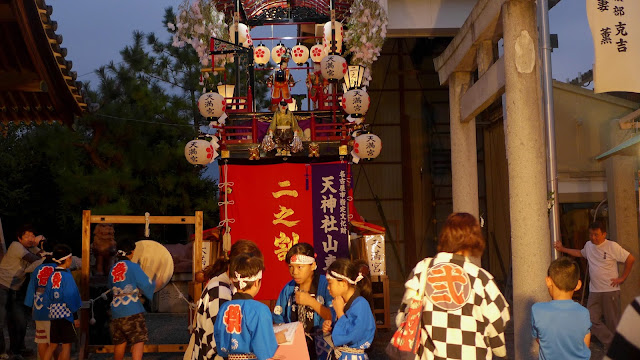 The drums pulse as the karakuri ningyo climbs across a set of monkey bars and hangs upside down from his knees. Like a magician rolling up his sleeves, the last bar rotates outward with the swinging puppet hovering above the ground, revealing the absence of strings or rods. The karakuri ningyo returns to his original position as the boys make their final blows on the large taiko drum. 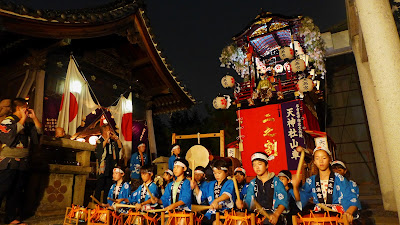 At Zuyumia shrine, Daiki introduces me to dango, a sweet rice dumpling that is lightly seared over flames and covered in a Japanese molasses. 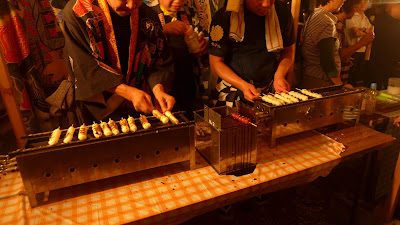 It's only 100 yen and the line is short, so I go back for seconds, promising Daiki I will floss after I get back to my apartment. 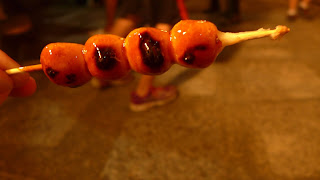 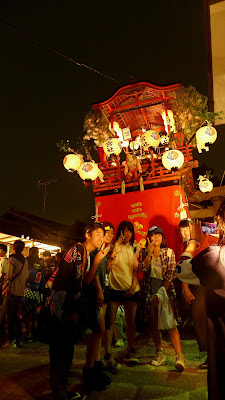 As the night falls, teenagers come out to enjoy the festival food, watch the performances, and snap photos. But, without the presence of tv crews and tourists, the festival never gets overwhelming. No one is worried about applying enough sunscreen, a crowded train ride home, or squeezing through people to get a better spot for the next performance. With the fall breeze and natural small-town coziness, there's something about Toda Matsuri that feels unexpectedly nostalgic.

But the festival never gets overwhelming. No one is worried about applying enough sunscreen, a crowded train ride home, or squeezing through people to get a better spot for the next performance. With the fall breeze and natural small-town coziness, there's something about Toda Matsuri that feels unexpectedly nostalgic. 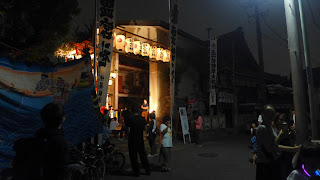 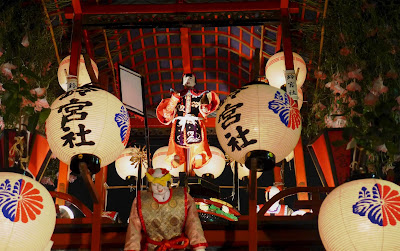 He removes a pen and starts to write on a suspended piece of translucent paper. The audience can see the ink soak through the paper as lines take shape. If you watch carefully, you can even catch the subtle movement of the puppet's head following the pen's tip.

After the final stroke, the paper is revealed to the audience from the front. I'm not sure what it reads, but the penmanship is flawless. I have to remind myself that it was written by a puppet operated by a 17th century method of strings and wooden rods.

The crowd of teenagers, children, and parents applaud as the puppeteer emerges. He wears a grin not unlike the puppet, as he removes the paper and holds it above his head. 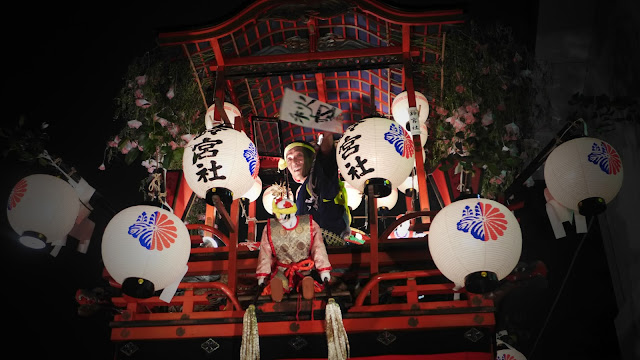 The audience cheers as he tosses the paper into the air. It floats to a young woman, hands outstretched. She shows her friends, smiling contagiously, and then passes it to a young boy by her side. 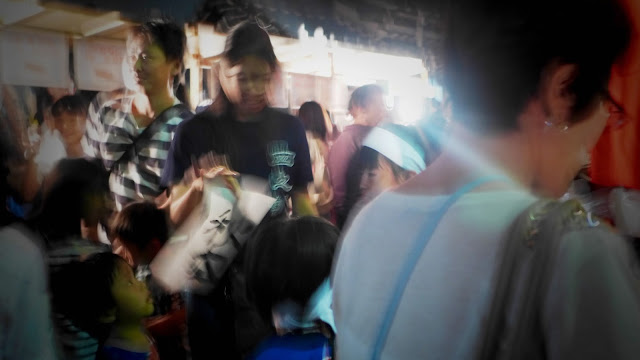 "What does that mean?" 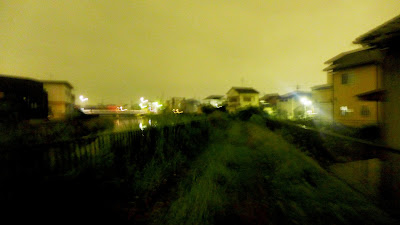