The Timeless Wonder of Fusuma Karakuri 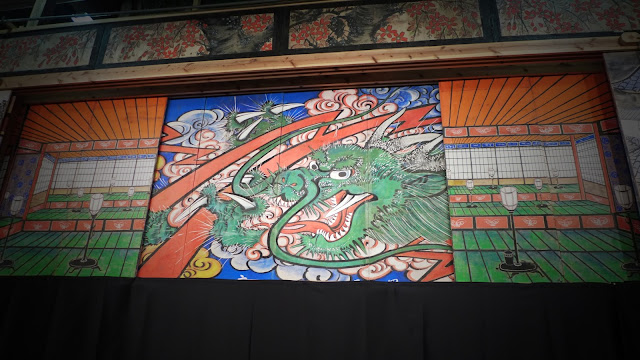 Five years after the end of World War II, citizens in Osaka gathered at Japan's first America Fair, where visitors explored scaled-down recreations of the Statue of Liberty and Mt. Rushmore. In Tokyo, onlookers gawked as live bikini clad models posed in department store windows while the sounds of Thelonious Monk and Stan Getz made their way across the country's radio waves.

Against the sounds of modern jazz and the whirlwind of General MacArthur’s Japanese reconstruction, the country witnessed a decline in traditional performance, specifically those art forms that stemmed from Shinto ritual, such as ningyo joruri. In post-war Japan, many linked Shintoism to Japan's pre-war militarism, and, as a result, puppet shows and traditional festivals, such as Nagoya Matsuri, were discouraged or banned.


However, in 1951, during this new era of bikinis and home television sets, a small town in the mountains of Shikoku gathered together to rebuild a theater dedicated to a lost form of Japanese entertainment - fusuma karakuri. 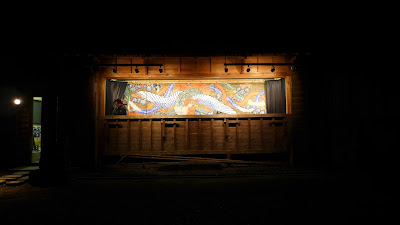 Fusuma karakuri, or, as it’s known on Awaji island, dogugaeshi, features hand-painted panels, or fusuma-e, that slide in and out of a proscenium, twist in unison, and glide up and down to create intensifying stage murals that reach deeper and deeper into the playing space. 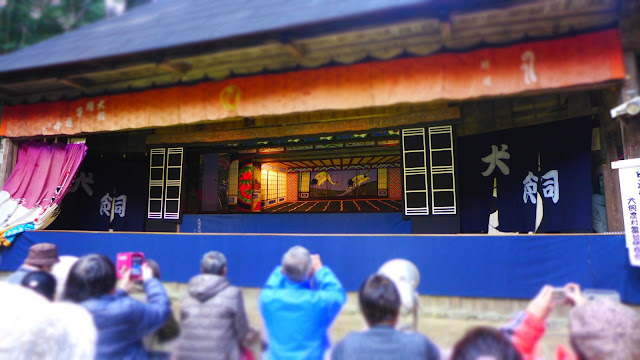 Similar to Kyogen, it was known as maku-ma, or a “between curtain show,” often performed after a Noh or ningyo joruri performance. After spending hours ensnared in the complex stories of Japanese dynasties and the linguistic cartwheels of the tayu, fusuma karakuri provided a mental recess. With only the strum of the shamisen, it activated a new part of the audience members’ minds where plot was cast aside for the magic of moving images. A mural depicting rabbits bounding across ocean waves glides across the stage to reveal a magnificent dragon while abstract floral patterns gently transform into a bamboo forest. 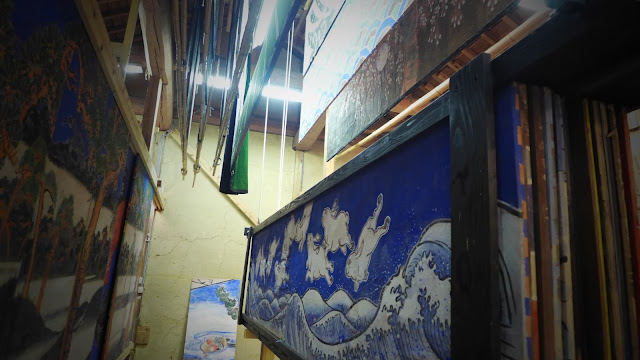 Transformation, or hayagawari, plays an essential part in noh, kabuki, and ningyo joruri performance. One of the most popular shows on Awaji island was Tamamonomae asahi no tamoto, where the performer is both puppeteer and magician, transforming costumes and characters seven times in one short act. Almost half of karakuri ningyo performances hinge on this moment of transfiguration, from a shinto priest turning into a miniature shrine to a graceful fan dancer morphing into an unruly lion.
When successful, these moments of transformation instantaneously alter the audience, leaving them in a state of awe. Fusuma karakuri is a celebration of this wonderment, a form of entertainment that connects audiences to that realm of surprise over and over again, tugging audiences through time and space. 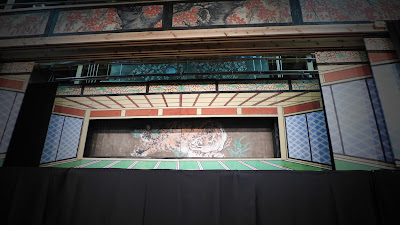 In the 1930s, fusuma karakuri was a popular past-time in Tokushima, but today only five fusuma karakuri companies remain active in Japan, performing just once a year during fall and spring festivals. The only exception is Awaji Ningyo Za who has daily performances at the end of daily ningyo jouri shows. 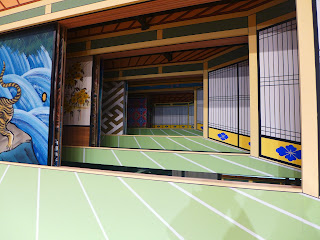 This puppet company has modernized the fusuma karakuri technique by creating an aluminum fly-system on wheels. The fusuma-e are controlled by nylon string, carabiners, and puppeteers in the wings who slide the panels from the left and right. 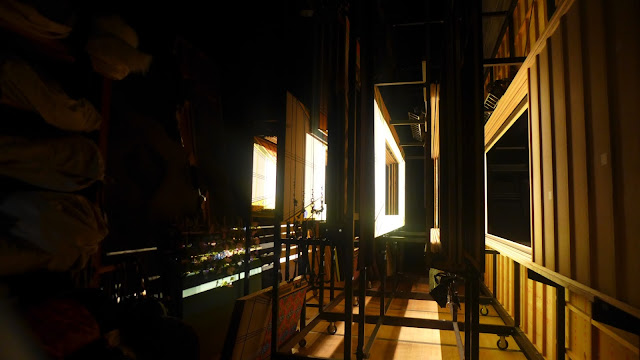 Awaji Ningyo Za has sped up the the timing of a traditional show, and the modern contraption limits the movement witnessed in farm theaters such as Inukai Noson and Ono Sakura no Butai.

It was at Inukai Noson Butai's November festival where I first came across fusuma karakuri. I was immediately captivated and bewildered. As I watched the paper doors slide in and out of the proscenium to the sounds of the shamisen, I was in a state of disequilibrium. “How are they moving the images? Where's the story? What exactly am I looking it?” This chatter soon quieted down into a mollified acceptance, like the moment you give into a dream. I was hooked. 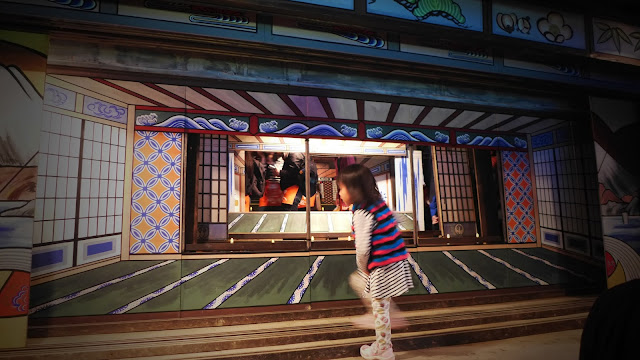 The next annual festival was in Kamiyama, about 30km from Tokushima City. After three months of e-mails, telephone calls, and assistance from my translator and friend Tatsuo Yasuda, I found myself riding a bicycle through the mountains of Kamiyama in total darkness as a river's resonant stride guided me back to the center of the road. As I held up my iPhone for light, I caught the glow of the theater, Ono Sakura no Butai, resting above the town’s Myozai district. Out of breath, Tatsuo and I climbed the stone steps to the rear of Tenno shrine, where the small wooden stage met us underneath a blossoming sakura tree. 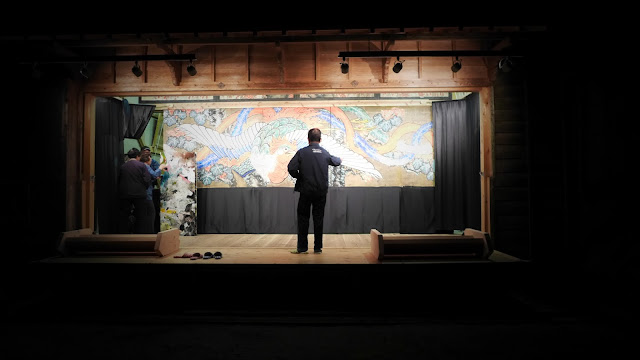 It’s here I get to know the director of Sakura no Butai, Ogawa Kazkiyo. Ogawa-san is a generous mentor who is both intimidating and big-hearted. He speaks with deliberate and piercing gestures, commanding attention and thoughtfully answering my endless questions. He perfectly sums up the experience of fusuma karakuri to wave watching: captivating, meditative, and rhythmic. Like other forms of puppetry in Tokushima, I try to find its connection to religious ritual, but Ogawa-san quickly extinguishes this argument. There isn’t one. Fusuma karakuri is entertainment, a type of diversion that thrived in Kamiyama at a time when Japanese identity, specifically shintoism, was disoriented.


Unlike many forms of traditional Japanese theater, such as Noh and bunraku, fusuma karakuri is easily accessible. It is language-less and doesn’t require prerequisite knowledge to fully appreciate. But it’s also for these reasons I’m surprised fusuma karakuri isn’t more widely celebrated. Even in the Japanese theater community there's a lack of familiarity. As I told Japanese friends I was headed to Tokushima to study "fusuma karakuri,” which translated to "mechanical sliding panel,” most assumed I was learning how to build automated doors. Fusuma karakuri is slighly more recognizable when it's called by its other name, dogugaeshi, especially on Awaji island. Yet, despite its accessibility and uniqueness, it remains a brief footnote in Japanese performance history. 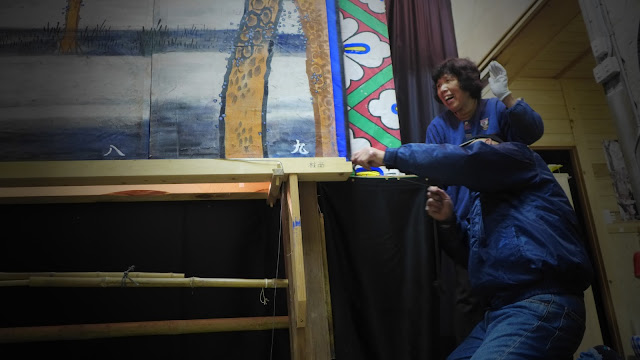 In 2003, puppeteer Basil Twist embarked on a project sponsored by The Japan Foundation that realized a contemporary fusuma karakuri production that captured the essence of the traditional art form. Basil’s production premiered in 2004 and has been performed across the globe since 2014, raising awareness about the medium. However, Basil Twist's production, titled Dogugaeshi, shares the same name of the tradition. Given the lack of documentation and research on traditional dogugaeshi, a Google query only wields results regarding Twist's production, further obscuring fusuma karakuri's role as a valuable traditional Japanese performance.

This year’s performance at Ono Sakura no Butai will feature two scenes from international artists Andrea Dezsö and Adam Avikainen, who were inspired by fusuma karakuri during their time at Kamiyama's Artist in Residency program. As Ogawa-san mentions these artists he beams with excitement. He is proud to have their work in his show, and he spends a lot of time sharing their work with visitors and audiences. He is eager to explain Avikainen's inspiration for his pieces Curry Typhoon and Turkey Earthquake (making curry during a typhoon and cooking turkey during an earthquake respectively).


Photos of Andrea Dezsö line the dressing room wall. Over the last few years, Ogawa-san incorporated Dezsö's pieces as one of the final fusuma-e in the performance. According to Kamiyama's Green Valley Artist Residency, "this may be the first fusuma-e screens used in a performance in Kamiyama since 1930".

Similar to ningyo joruri, a successful fusuma karakuri performance requires a intuitive connection between puppeteers. To make this a bit more complicated than your typical puppet show, your partner is standing 30 feet away on the opposite side of the stage. These puppeteers must find a shared breath and united rhythm as they pull strings, tie-off rope, grab painted doors, and twist bamboo rods. 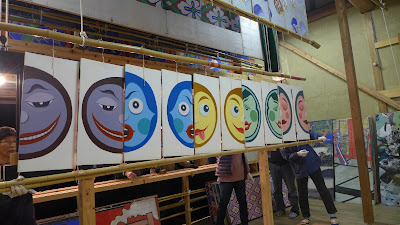 During a performance there is a conductor who leads the puppeteers’ movements with the hyoshigi, two pieces of wood that are clapped together. Since fusuma karakuri has no human actors on the stage, mistakes are easily noticeable and can easily disrupt the rhythm. This makes the need for harmony between puppeteers even more critical. To help guide the process, Ogawa-san created a script that organizes all 241 panels, dictating their placement and movement.

The script also illustrates Ogawa-san’s process as a director of fusuma karakuri. He must take in account the way different movement can effect an image’s meaning. Although it makes things more complicated, he insists that the ten panels that compose a resting tiger must all be removed from stage right. “You can’t see a tiger split in the middle,” he insists. Ogawa-san is constantly considering how the movement and order of these images change context and alters the viewer’s experience. 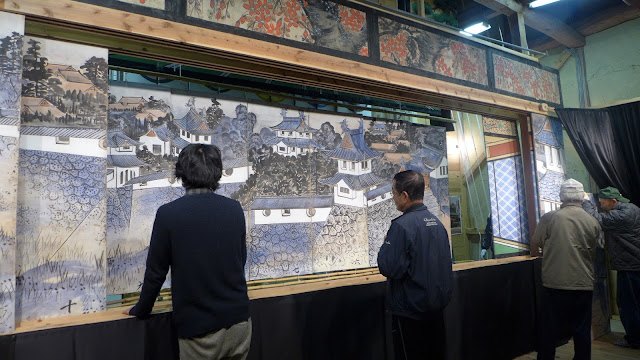 After rehearsal at Sakura no Butai, we sit around a table eating American chocolate I brought from home. I ask about the puppeteers’ day jobs. There are two farmers, a machinist, a councilman, a florist, a house wife, and a metadata specialist. For one of the older puppeteers, this will be his 30th year performing fusuma karakuri. 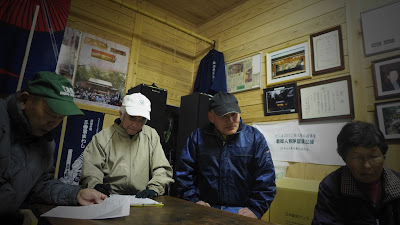 They share memories from their youth at the theater, where the community gathered to watch outdoor movies, have picnics, and experience the captivating tradition.

During the 1950s, as a golden age of cinema dawned and the future was broadcasted on television sets across Japan, a small town in the rural mountains of Shikoku came together to rebuild a fusuma karakuri theater. Today, as we're surrounded by smartphone screens and digital media, the wooden theater underneath a blossoming sakura tree, where a metadata specialist and farmer move painted panels in and out of proscenium, feels radically innovative. Fusuma karakuri reminds us that our sense of awe is not always tethered to the future - the past is still filled with wonder. 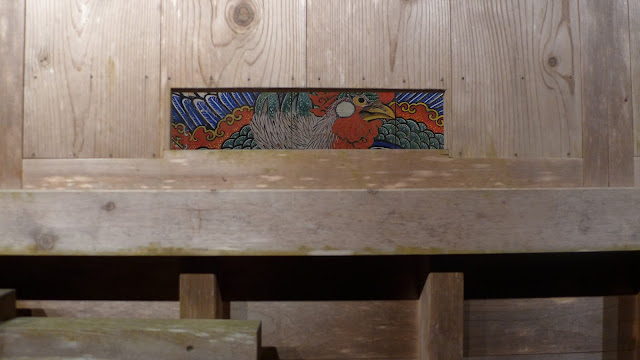 For more information on: