Uncovering the Puppet Rituals of Tokushima

Outside the Tokushima Prefecture Museum, Kazuhide Tsujimoto stands by an ashtray checking his watch. With stylish leather loafers, sunglasses, and an intimidating poker-face stare, Tsujimoto is not what I imagine when I think “hako-maswashi ritual puppeteer.” He abruptly ashes his cigarette and heads to his hatchback. I have trouble keeping up, his pace steadfast, his eyes fixed ahead at something unseen. Tsujimoto is clearly on a mission. 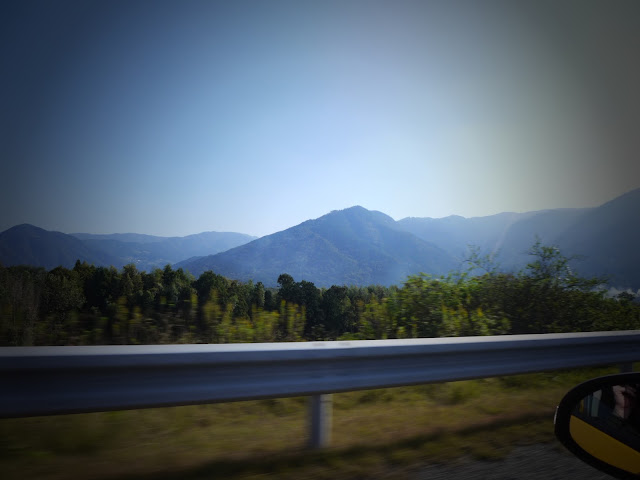 Hako-mawashi often refers to the nomadic puppet performance performed in rural cities across Japan, specifically on the Shikoku and Awaji islands. These puppeteers, or dokumbo-mawashi, would travel with boxes strapped around their necks that served as both storage and a miniature stage. The earliest puppets were bodiless heads on wooden rods. Eventually, these figures transformed into larger costumed puppets that were transported in crates and carried from bamboo poles. Hako-mawashi certainly speaks to the inherent transient lifestyle of puppeteers, but it’s far more than traditional street theater. Hako-mawashi is a missing link, a part of performance history that uncovers the puppet’s mystic powers. It's a doorway between puppetry and the gods.

Hako-mawashi is rooted in religious ceremonies performed in shrines during Japan’s Edo era. One example is Sanbasō-mawashi, where a puppeteer manipulates a Sanbasō puppet through a series of ritual choreography until it enters into a mystical trance. This trance is marked by the puppet’s eyes rotating upward through a mechanized trick head, or gabu. Once the puppet is in this transcendent state, he adorns a black mask, and shakes a suzu bell, performing a purification rite. Other types of hako-mawashi include ebisu-kaki, where a puppet of god Ebisu sings songs, requests a little sake, and grants good fortune.

One of the most comprehensive English-language books I've found on hako-maswashi is Jane Marie Law's Puppets of Nostalgia. In the text, she writes:

”These wandering puppeteers...performed an essential ritual function. They mediated the boundaries between the distinct but sometimes overlapping worlds of sacred forces and human beings, order and chaos, life and death, fertility and infertility. Their ritual performance served to usher in the new year, purify dwellings for another season, and revitalize sacred forces in the community."


Eventually, these traveling dokumbo-mawashi teamed up with storytellers (tayu) and roaming musicians, giving rise to ningyo joruri and, in the 19th century, Bunraku puppetry.

Working as a puppeteer in Tokushima during the Edo era was like being an actor in Astoria, Queens today. Documents from the early 1800s illustrate a population where over twenty percent of citizens worked as puppeteers.


Puppeteers had a vital role to play in Japanese life. They were ritualistic shamans who could appease the unknown and dispel the impurities of the past. Without them, crops wouldn't harvest and the natural world remained untamable. However, since these puppeteers dealt in a realm of enchantments and pollution, they were considered unclean, and were edged out of towns into their own outcast neighborhoods.

Tokushima and Awaji were filled with these misfit districts until the early 20th century when the hako-mawashi practices almost vanished due to burgeoning entertainment and the strain of World War II. Ultimately, a post-war environment emerged that frowned on ritualistic customs.

This last New Year season, Tsujimoto trudged through miles of snow, visiting hundreds of houses, and performing hako-mawashi’s ebisu-kaki ritual for residents. When areas of Shikoku face a poor harvest or drought, Tsujimoto is called to perform these rites for the distressed towns.

Yet, when you ask him about his occupation, he won't say “puppeteer.” “Scholar,” he responds, silently giving credit to the giants before him. It’s these giants who seem to fill Tsujimoto’s thoughts. I sit in his studio, piled high with countless books and hundreds of puppets by one of Japan’s most famous puppet-makers, Tengu Hisa. 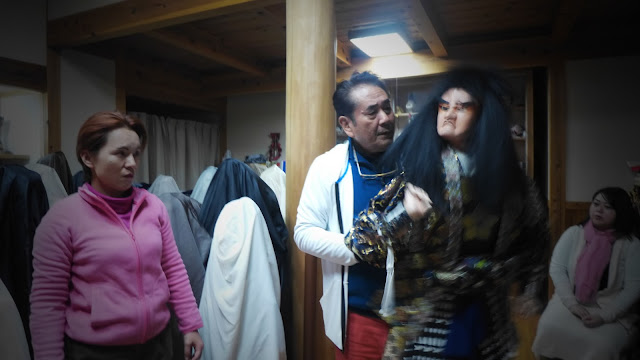 Tengu Hisa carved beautiful wooden heads, or kashira, that are immediately recognizable for their craftsmanship and large size. These puppets, many of which mirror the puppets used in Edo era hako-mawashi performances, are larger than traditional Bunraku puppets. Despite being much heavier than their puppet descendants, they are only manipulated by a single puppeteer. 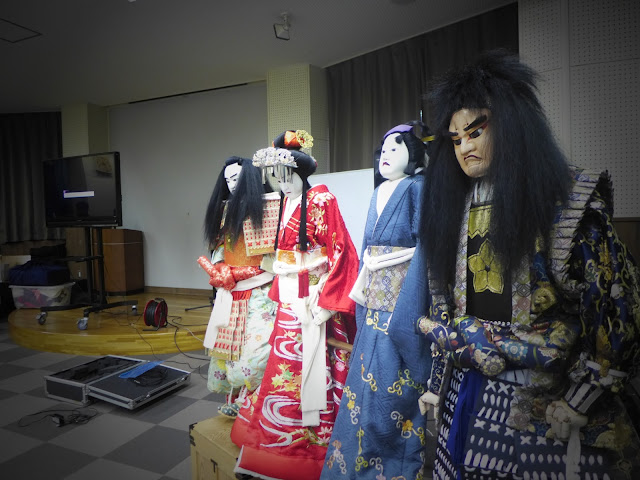 The Tengu Hisa name has continued for three generations, and, today, at the foot of Tokushima’s majestic Mt. Bizen, sits Tengusa Hisa’s original studio and home preserved as a museum. 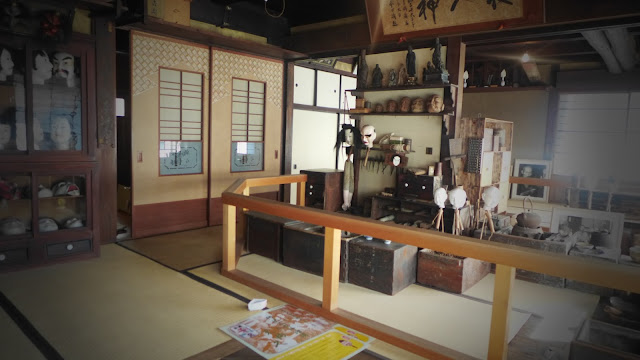 I stand outside the museum snapping photos of the quiet neighborhood. With narrow streets and farmland filling most of the area, it’s hard to imagine this district teeming with hundreds of puppeteers. Even here, standing in one of the centers of hako-mawashi, the art form feels just out of reach. 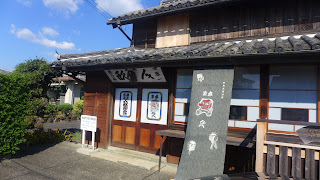 I turn to ask Tsujimoto a question, but before I say anything I realize he’s already made his way back to the car, lighting a cigarette while eyeing the road in his rear view mirror.

This afternoon, we meet at a primary school in the center of rural Shikoku. Middle school students fill into a recreation room as Tsujimoto and his two assistants, Masako Nakauchi and Kimiyo Minami, unpack the hako-maswashi boxes. For the audience of adolescents, Masako and Kimiyo perform examples of hako-mawashi, such as ebisu-kaki, Sanbasō rite, and a short ningyo joruri show. 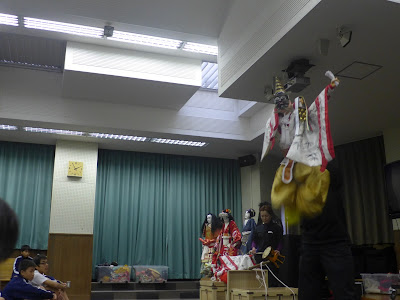 Today’s demonstration ends with Tsujimoto, who looks out at the group of over one hundred middle school students with an unexpected smile. He seems like a different person in front of the group, comfortable and cool, emphatically delivering his closing remarks. Tsujimoto is doing everything he can to pass his passion on to these students, urging them to recognize the importance of Japan’s artistic history before it’s too late. This is far from a lecture, but an act of transference.

My translator paraphrases, “Tsujimoto feels like most Japanese university students who study art know Picasso and Van Gogh, but know nothing about traditional Japanese art. Those who study theater know Shakespeare, but not Noh.”

“Foreigners care more about Noh than those who study in Japan," he adds.

As Tsujimoto continues, I think about him alone at the wheel, traveling through the roads of Tokushima witnessing a town forget. Today, he does everything he can to help the city remember.

When it seems like Tsujimoto is about to say goodbye, he stops for a moment, his speech growing more serious.

“His grandmother was a puppeteer,” my translator explains. “But she faced, you know, discrimination?"

Discrimination is a word I I hear a lot when it comes to life as a puppeteer during the Edo Period. I nod.

“When her children were born she was afraid they would face the same fate, so she cast her puppets into the river, hoping her children would have a better future.”

Today, with his studio filled with puppets, books, and a career built on preservation of this endangered traditional art, it feels like Tsujimoto is treading in that river, piecing together fragments of those lost puppets. Like the Shinto priests before him, delivering their puppets into other-worlds, Tsujimioto is wading in a realm we can no longer see: the past.

After the lecture, Tsujimoto sits in the school principal’s office chatting over coffee. He looks gleeful, and, for the first time since I’ve been around him, relaxed. He leans back and smiles.

As the children return to their classes, we pack up Tsujimoto’s van, carrying Tupperware containers to the trunk, where Tsujimoto meticulously organizes them. I return to the gymnasium to make sure nothing was left behind. When I return, Tsujimoto has already left. I look across the parking lot to see the rear of his van, traveling down the road, vanishing into the horizon. 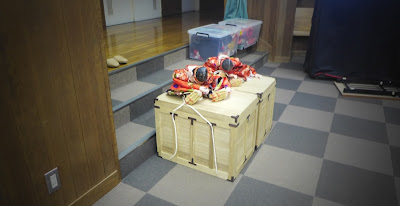 For more information about hako-maswashi and ritual puppetry in Tokushima and Awaji, I can't recommend Jane Marie Law's book enough:

Puppets of Nostalgia: The Life, Death, and Rebirth of the Japanese "Awaji Ningyō" Tradition